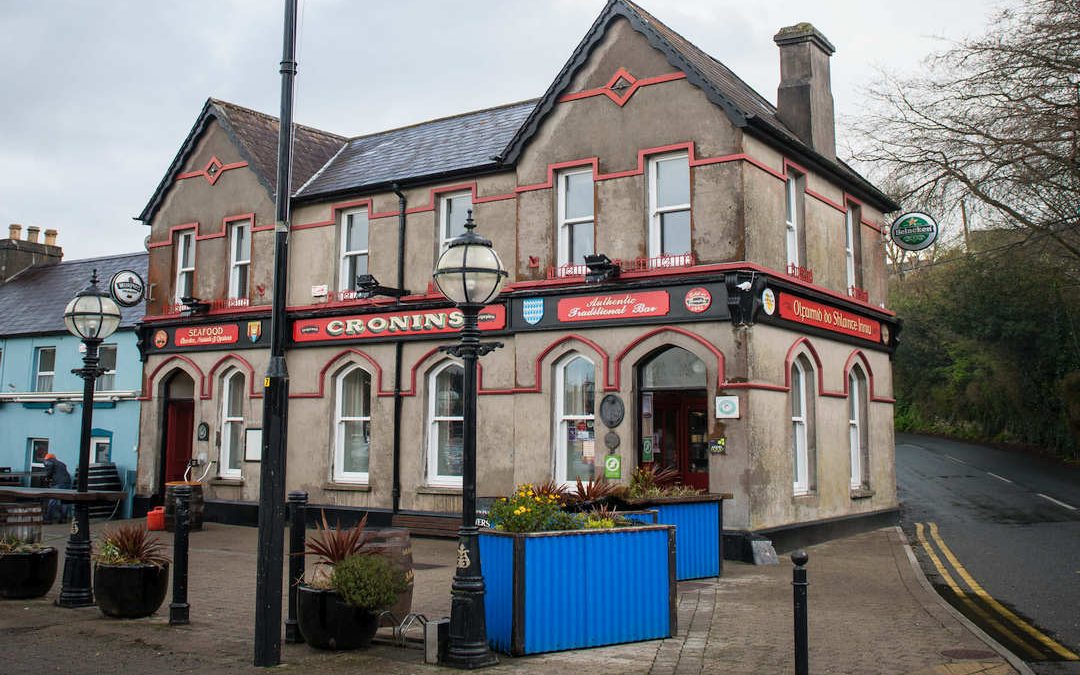 Haven in Crosshaven   In our series of Great Whiskey Bars, we travel to Crosshaven, County Cork, a quaint village on the south bank of the Owenabue estuary just thirty minutes drive from Cork city centre. It’s here in this village with a population of about 2,500 inhabitants that we visit a community focal point, Cronin’s Pub. Crosshaven itself has a rich seafaring and boatbuilding history and is home to the world’s oldest yacht club, the Royal Cork Yacht Club which has made its home there since relocating from nearby Cobh in the 1960s. Ideally situated along Cork harbour, a natural harbour and river estuary at the mouth of the River Lee lays claim to be the second-largest natural harbour in the world by navigational area. Crosshaven House, a Georgian home built-in 1769 by William Hayes overlooks the village square and during the famine provided a soup kitchen for the unfortunate victims.   - 'the River Lee lays claim to be the second-largest natural harbour in the world by navigational area.' -   There are also a number of forts located along the harbour, including three from World War I. The classical coastal artillery fort, Camden Fort Meagher, is well worth a visit and has been open to the public and run by community volunteers since 2010. It is open during summer months from early June to mid-September. Recognised as one of the finest remaining examples, the fort was built in the 1550s and actually most of the fort (65%) is located underground in the labyrinth of tunnels and chambers. If you get the chance to visit Crosshaven, a boat trip on the harbour is well worth exploring. Ocean Escapes and Cork Sea Safaris organise wonderful boat tours of the harbour and these provide a fantastic viewing perspective on the forts and villages as well as a nice way to enjoy a dram. Originally established as a hotel in 1892, it was transformed into Cronin’s Pub in 1970 by the Cronin family who owned several pubs and hotels in County Cork. Having grown up in the hospitality sector, current owners Séan, and his wife Theda, run the pub alongside their son Denis and daughter Joleen. Theda is originally from the Netherlands and met Séan while working in and visiting Crosshaven after having completed her studies back home. Theda made her mark on the pub by introducing new cuisine, which would have been considered as adventurous in its day; oysters, mussels and seafood chowder. Denis established and runs the Mad Fish Restaurant which offers lunches seven days a week and a wonderful evening dining experience from Tuesday to Saturday in the summer, and Thursday to Saturday in the winter season. The food we sampled here was honest, flavoursome food and the seafood has a freshness as if the fish jumped off the neighbouring fishing boats into the kitchen. Séan is an avid whiskey enthusiast and the pub offers a magnificent range of over 120 different whiskeys. The pub has seen a huge growth in the interest of whiskey and Séan comments that people are more knowledgeable and enthusiastic than ever before. Séan used to run whiskey nights regularly, although now Joleen takes on most of that ‘chore’. This is a traditional pub with a beautiful, relaxing and cosy environment. Being a real sports enthusiast, in particular boxing, the pub is adorned with sports memorabilia Séan has collected and been gifted over the years. Also being an antique and curios collector, you’ll find unusual and interesting trinkets displayed throughout the pub. The pub is very much a community focal point and during the summers host, many events organised by Joleen. Live music, festivals, street kitchen all take place in the front square and generate a wonderful atmosphere. Apart from managing the events and marketing for the pub, Joleen is also a photographer and has published two books, the Coast of Cork in 2008, and the Coast of Kerry in 2009. We’ve taken advantage of and used her photos for this article. As Séan and Theda approach retirement this year we are sure they are comforted to know that what they have created here is in the capable hands of their son and daughter.
Subscribe to unlock this premium content. Existing subscribers log in