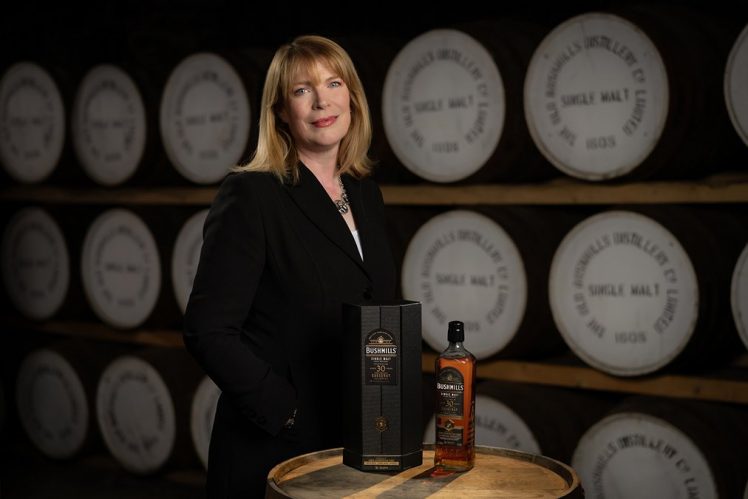 After their recent launch and the widespread acclaim of the Causeway Collection, Bushmills Irish whiskey have pushed the boat out even further with their oldest release in the series to-date. A triple distilled Single Malt Irish whiskey triple cask. Oloroso Sherry and Bourbon casks for 14 years and then 16 further years in a virgin American oak cask. The sweetness, depth and complexity of flavour in a cask strength  whiskey that is beautifully balanced. Speaking of balance, this will set you back €700. In the current marker that’s a fair pricing for a 30-year-old limited to 432 bottles and ABV 48.4%. We’ve tried it and contemplating booking a flight to catch this travel retail only release.

Bushmills, Co. Antrim, Friday 11th December 2020: Bushmills® Irish Whiskey today announced the release of its 30 Year Old New American Oak Cask single malt. With only 100 bottles available in 2020 and the remaining 332 bottles to follow in 2021, the release is the highest aged reference so far in The Causeway Collection, a series of extremely rare and unique cask finished single malt whiskeys from the world’s oldest licensed whiskey distillery. This latest release will be exclusive to The Irish Whiskey Collection at Dublin and Cork airports.

A stone’s throw from The Old Bushmills Distillery, the Giant’s Causeway has been a source of inspiration to Bushmills’ master blenders for centuries. Its extraordinary hexagonal basalt columns, each unique but perfectly locked together, form a series of steps, much like the expressions in The Causeway Collection. Bushmills has given these rare casks unprecedented years of rest, decades in some cases, creating unique waves of flavour every bit as dramatic as the Northern Irish coastline. 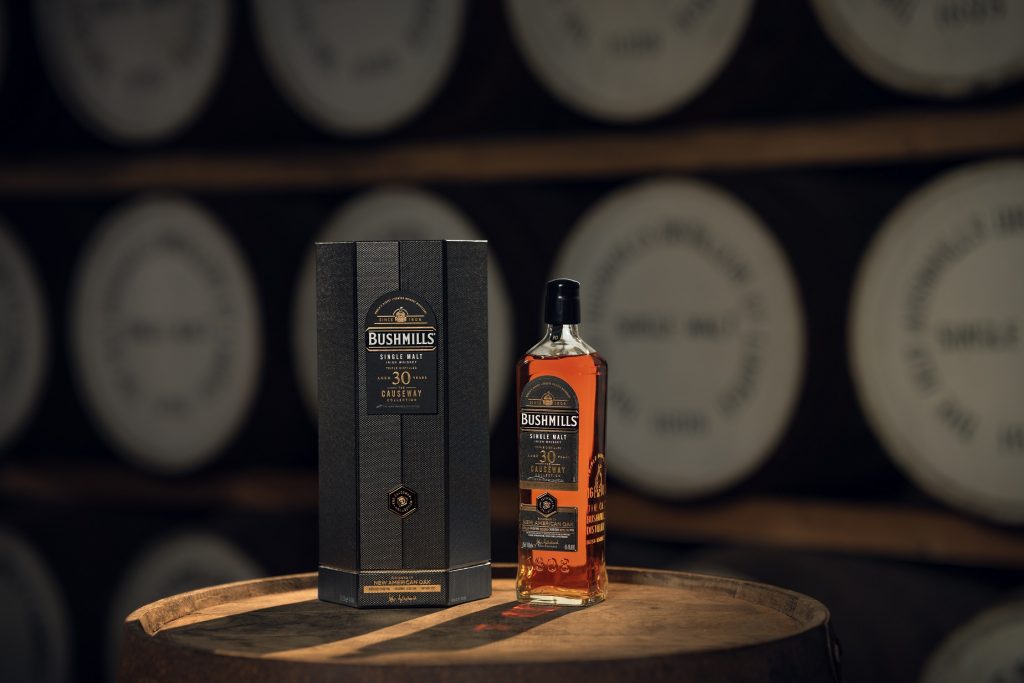 The 30 Year Old New American Oak Cask is one of the last of ten releases within The Causeway Collection across nine markets for 2020.  First matured for 14 years in oloroso sherry butts and bourbon barrels, Bushmills have added deeper waves of flavour by finishing this single malt in new American oak casks for an unprecedented 16 years. Non chill-filtered and bottled in September 2020 at cask strength, it is imbued with key notes of honeyed malt while the virgin oak imparts intense flavours of vanilla, chocolate and warm wood.

All the whiskeys used in The Causeway Collection have been expertly crafted and cared for by Bushmills Master Blender Helen Mulholland through her near 30-year career at The Old Bushmills Distillery. Several of the whiskeys were laid down by Helen during her internship at the distillery in the early 1990s.

Helen has since gone on to be the first woman inducted into the Whisky Magazine Hall of Fame and, last month, was awarded a Chairman’s Award by Drinks Ireland/Irish Whiskey Association for her contribution to the development of the Irish whiskey industry and category.

“It’s a privilege to work with such rare whiskeys in The Causeway Collection. This 30 Year Old New American Oak Cask, our oldest single malt to date, is a truly special Irish single malt. Maturing it for 16 years in the new American oak casks has allowed the sweetness to gradually soften, making it creamier and velvety smooth in texture. I love its tropical fruit notes and hints of spiced coconut alongside the warm and reassuring wood notes.

“I’m immensely proud of how we’ve been able to create such sensational waves of flavour in a 30 year old whiskey. Like the whole Causeway Collection, it’s a celebration of our passion for single malts, our rare and unique casks and our 400 years of whiskey-making heritage.”

“We are delighted to announce the launch of the 30 Year Old New American Oak Cask as a global travel retail exclusive at Dublin and Cork Airports. Releasing this special single malt into global travel retail is a testament to our commitment to the market and an example of how we are always looking to give travelers something special they can’t find anywhere else. For travelers to Dublin and Cork Airports, what better option than the oldest single malt release from Bushmills, the world’s oldest licensed whiskey distillery?”

The rare and limited 30 Year Old New American Oak Cask from Bushmills Irish whiskey will be on sale from Thursday 17th December 2020, available exclusively from The Irish Whiskey Collection at Dublin and Cork airports. Only 432 bottles of this single malt are available, bottled at cask strength (48.4% ABV), non chill-filtered and priced at €700 RRP for 700ml.

Taste
Sensationally smooth and sweet, with vanilla and chocolate interweaving on the tongue, and a warming spiced coconut. Then the gentle wood note reappears, to remind us of its 30 patient years spent sleeping in oak casks.

Finish
Exceptionally long with toasted oak and sweet vanilla lingering on the palate.

For more information about the new release and The Irish Whiskey Collection at Dublin and Cork Airports, please visit theloop.ie.