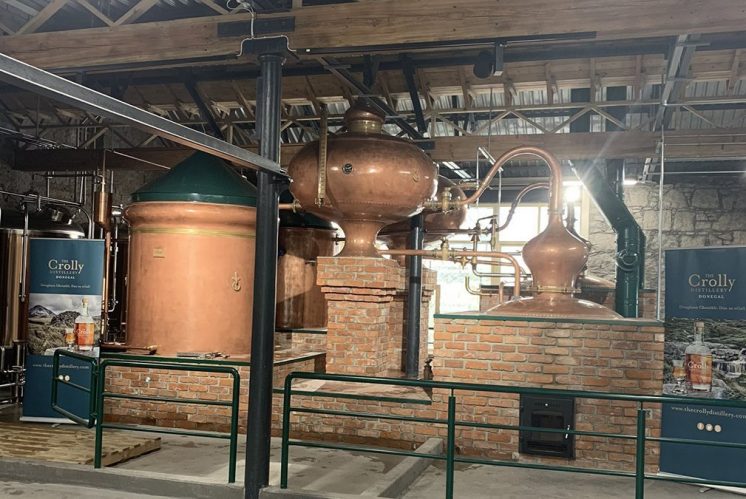 Congratulations to The Crolly Distillery based in Crolly, County Donegal on becoming the 34th operational GI Irish whiskey distillery who have distilled their first Single malt spirit. The distillery is located in the heart of the Donegal Gaeltacht and has been supported by Údarás na Gaeltachta. 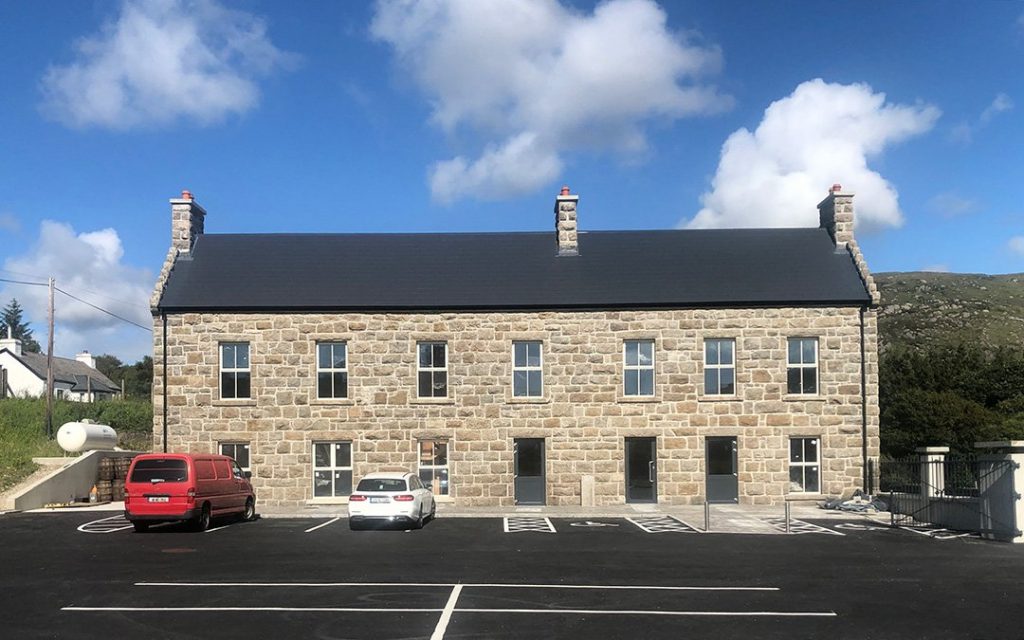 The Journey began in 2013 when friends Joe Devenney, Conor McMenamin and Kieran Davis were discussing the revival of Irish whiskey.

They have renovated the ‘Old Crolly Doll’ factory, built in 1901 and it houses ex-cognac copper pot stills.  Distillation commenced at the new Irish whiskey distillery on 24th September 2020.

“The direct firing of the stills here in  Crolly; a relic of yester-year has largely been superceded by steam heating systems industry-wide over the last fifty years and with it some of the complexity has been lost; the Maillard reactions that take place under the intense heat of direct-fired stills adds a fuller, more robust flavour to the new make spirit and should be much sought after by connoisseurs.”

“Furthermore, the worm tub, again most have been superceded by shell and tube condensers, which are more efficient, here in Crolly we have gone for the traditional worm condenser which reduces the copper contact of the vapour and as such lends to a fuller-bodied more complex spirit character.”

“The pre-warmer, holding the wash at an elevated temperature, will encourage the proliferation of  lactic acid bacteria at the tail end of fermentation, allowing the creation of organic acids and fusel alcohols – by holding low wines and feints at an elevated temperature the organic acids and fusel oils will esterify and create intense fruity flavours. While these two parameters lend themselves to ‘increased complexity’, by careful choice of yeasts, longer fermentation regime, bright wort clarity and slow distillation techniques – Crolly should produce a fresh fruity new-make spirit which should be delicious at a young age, with the compexities created during distillation being selected with narrow spirit cuts on the distillation run, and long slow distillations to maximise reflux to create fantastic bright and fruity spirit”

“Once COVID-19 restricitions are eased, we would aim to further invest in this project by developing the Crolly Visitors’ Experience.”

The factory was originally built by Bord na gCeantar Cúng or the Congested Districts Board and the famous Donegal Carpets were weaved here – creating much-needed employment to the area in days of old. It was also home to the famous ‘Crolly Doll’ for almost half a century.

According to Joe Devenney:

“It has lain dormant for some twenty years now so it is wonderful to see life returning to the factory and to boost the local economy in these straitened times.”

“The factory has been carefully restored and the industrial heritage of the building has largely been preserved.”

Crolly Distillery has an output projection of 50,000 LPA’s per annum.  The spirit will mature on-site, initially in ex-bourbon casks.  As it is 180 years since Burt closure, 180 casks are being pre-sold to the public, with over one hundred sold pre-production.