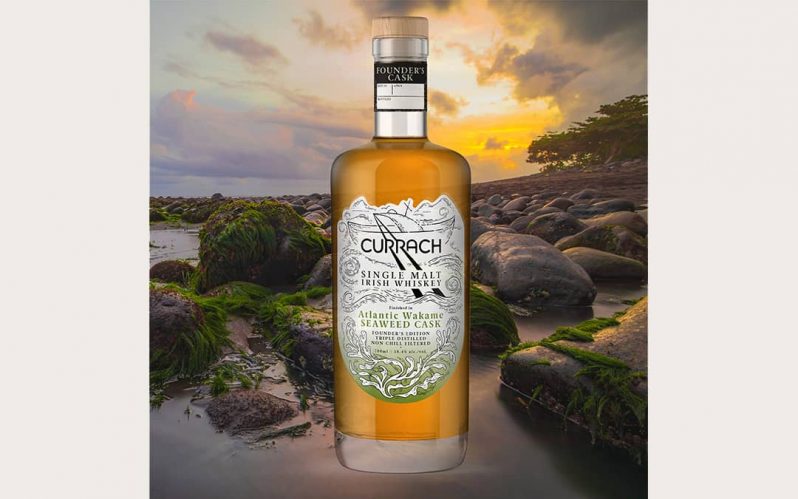 Following on from their world-first Irish whiskey release earlier in the year, Origin Spirits have today officially launched the second in the Currach single malt Irish whiskey series. They have issued the following press release.

Currach Single Malt Irish Whiskey is a true innovation in the world of whiskey, and the first to be finished in seaweed charred casks. To celebrate this unique creation, we have released a limited edition series of ‘Founders’ Cask Strength bottlings. These bottles have been drawn from the very first casks we used to explore the idea of enriching a single malt Irish Whiskey with seaweed.

The second bottling in this series is the Currach Single Malt Irish Whiskey – Founders Wakame Cask Strength release. This has been created using sustainably hand harvested and organic Irish Wakame Seaweed. This is a limited edition single cask of 220 hand-filled and hand numbered bottles at cask strength ( 58.4% alc./vol.). This is a new voyage for the whiskey category and a rare opportunity to own a piece of Irish Whiskey history.

“Our vision on Currach was to create a single malt Irish whiskey based on various elements of the Irish terroir. Our land produces some of the best malted barley in the world and our seas yield wonderful organic and sustainable seaweed. Never before have these two elements been brought together in a whiskey and we are proud that this is a world’s first. The union of land & sea has become the backbone of Currach, and gives it such a uniquely rich, multi layered and complex character.”

“After the success of our initial Atlantic Kombu Founders Cask, we are now delighted to release our second Founders Cask variety created using Atlantic Wakame seaweed, thus showing the incredible diversity of Ireland’s maritime terroir, and how this influences our single malt whiskey. This will be followed by the Currach Atlantic Wakame commercial release in 2021.

“We’re also thrilled that this exciting release will be launched in association with Ireland’s first ever whiskey subscription service, Three Drams”.

Palate:
A briney coastal flavour coats the mouth on entry, followed by sweet tropical fruits and salted caramel, giving way to vanilla, marshmallows and a hint of strawberries.

Three Drams:
Three Drams, is a monthly whiskey tasting subscription with a focus on Irish whiskey. Subscribers to the Three Drams service will get an exclusive pre-sale opportunity to purchase a bottle of Currach Single Malt Irish Whiskey – Founders Wakame Cask Strength before it goes on general sale on Friday December 4th. They will also receive a 30ml sample of the product in their December tasting pack for the Three Drams live virtual tasting on Thursday December 17th, which Origin Spirits will join to talk through the product. This will be the first time the product will be tasted anywhere in the world.