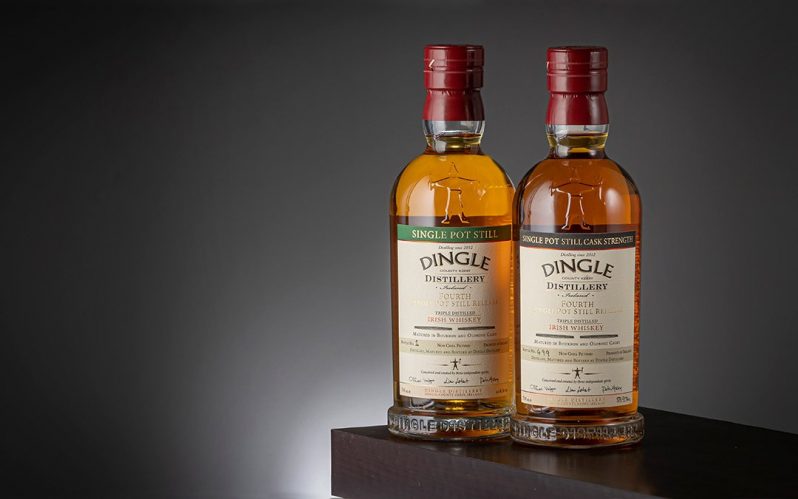 On 5th November the fourth Single Pot Still Irish whiskey will be released from Dingle Distillery. They have issued the following press release.

Dingle Distillery is proud to launch its highly anticipated Fourth Single Pot Still Release this week. Some 8,000 bottles of the liquid have been produced from 25 casks, of which half will be sold domestically and half will be exported to international markets including the US, UK, Germany, and France. A further 500 bottles of Pot Still Cask Strength are also being released, a first for Dingle Distillery.

A sister company of the Porterhouse Brewing Company, Dingle Distillery opened its doors in 2012. With an ethos centred on quality, artisan whiskey production, it was one of the first of the new age of distilleries in Ireland.

“When my father OIiver Hughes and his business partners Peter Mosley and Liam LaHart filled the first casks at Dingle Distillery in December 2012, the distillery was one of the first to buck the whiskey revival trend in Ireland, part of a new generation of artisan distilling.”

“With an ambition to create something special in Dingle, the very first small batch whiskey was released in December 2015 with just 252 bottles. Four further batches have followed, along with three Pot Stills – indeed Dingle was the first distillery outside Midleton to release a Pot Still. We’re as passionate about flavoursome, well-crafted spirit today as we were then, and we’re so excited and proud to launch our Fourth Single Pot Still Release.”

Priced at €95.00 (RRP) per 70cl bottle, the new Pot Still Irish whiskey (46.5% ABV) is available to purchase from 5th November 2020 at DingleDistillery.com, IrishMalts.com, Celtic Whiskey Shop and across independent off-licenses nationwide. Dingle uses non-chill filtration to produce its whiskey and adds no colouring.

“It has been an absolute pleasure to play my part in creating the latest Single Pot Still Irish whiskey release from the Dingle Distillery. Our Fourth Single Pot Still Release combines fully matured ex bourbon and ex Oloroso sherry casks to produce a whiskey which allows the uniqueness of the Pot Still spirit and the quality of the wood to shine through.”

Unique to Ireland, the single pot still tends to yield smaller volumes, with a more intense character to begin, but matures quickly.

Taste – Initially sweet with a burst of spice. Dark fruits, figs and raisins come to the fore followed by dark chocolate and a sprinkling of chopped nuts.

With a focus not just on quality but also on innovative new approaches, Dingle is an independent family-owned business thanks, in part, to its Founding Fathers programme.

Dingle Distillery is highly regarded for its Dingle Original Gin, recognised as ‘World’s Best Gin’ at the World Gin Awards in 2019, and also produces Dingle Distillery Vodka, noted for being quintuple distilled.