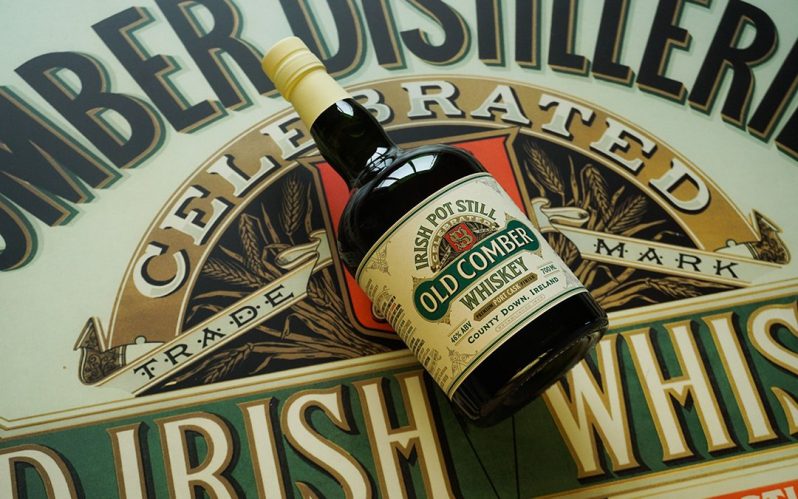 This new release from Echlinville Distillery is a blended pot still Irish whiskey bottled at 46% ABV, retailing at £45. The initial release is less that 1,000 bottles.

The Echlinville Distillery is reviving the famous Old Comber Irish Whiskey brand after a near 70 year absence.

One of the original Irish whiskey giants, Old Comber Whiskey was founded in 1825 and produced at the Comber Distilleries, which were located just ten miles from where Echlinville now stands.

Comber Distilleries fell silent in 1953 and Old Comber joined the list of Ireland’s lost whiskeys. In testament to their continued commitment to put Co. Down back on the world whiskey map, Echlinville has unveiled its first release of Old Comber Irish Pot Still Whiskey – a pot still blend finished in Ruby Port casks and bottled at 46% ABV and retailing at £45 RRP.

“We are proud to announce the return of Old Comber Irish Pot Still Whiskey. One of Ireland’s most celebrated whiskey brands, Old Comber was famed for its quality and bold flavour. Its loss was lamented by whiskey enthusiasts around the world.

“Anyone who knows Echlinville will know that we are incredibly proud of our roots. From rolling barley fields to huge malting houses and one of the largest distilleries in Ireland, County Down and the area around Strangford Lough in particular, has a strong whiskey heritage. Comber and its distilleries was widely regarded as the home of double distilled pot still whiskey.

“We are honoured to bring Old Comber Whiskey back to its County Down homeland. In homage to the brand’s origins, our first Old Comber Irish Pot Still Whiskey release is a premium blend of pot still whiskeys, predominantly double distilled here at Echlinville, just ten miles from where the Comber Distilleries once stood.

“Old Comber was renowned for its port and sherry cask finishes. In honour of that tradition, this new release has been aged in American Oak and Bourbon casks in the Echlinville warehouse and finished in the finest Ruby Port casks.

“Deep amber in colour, this whiskey boasts notes of fresh vanilla pods, toffee apples and Battenburg cake on the nose. On the palate, a creamy pot still mouthfeel with treacle toffee, apple tarte tatin spiced with cinnamon and nutmeg, opening up to rosewater, raspberries and cream. Those toffee and spice notes continue through to a medium finish with pecan nuts fading out to mellow oak tannins and sweet spice in its final notes. This limited release stays true to the Old Comber name and marks a new chapter in the story of Old Comber, Echlinville and the ongoing Irish whiskey revival.”

Echlinville is also custodian of the famous Dunville’s Irish Whiskey brand. Another giant of Irish whiskey history, Echlinville revived Dunville’s in 2012 and has gone on to restore it to its rightful place among the world’s best whiskeys.

“This corner of Ireland has a great story to tell in terms of its role in Ireland’s whiskey heritage. If Dunville’s was The Spirit of Belfast then Old Comber, one of its closest whiskey neighbours, was the spirit of County Down. In fact, both brands featured in BBC2’s recent Whiskey Talkin’ programme, which explored the history of Irish whiskey, the Dunville’s return and our collaboration with Fionnán O’Connor to recreate the original Old Comber mash bill – a whiskey that we hope to release when it reaches the seven year mark.

“These old brands are hugely important. Throughout the eighteenth and early nineteenth centuries, they built an industry that was the envy of the world. Their revival will play an important part in the resurgence of that industry. In our view, names like Dunville’s and Old Comber deserve to be part of the Irish whiskey renaissance.

“Dunville’s and Old Comber dominated whiskey production in the north of Ireland, but they had much more in common than huge distilleries and vast warehouses. In 1872 James Bruce was a director in Dunville’s and his brother Samuel Bruce, whose initials feature on the Old Comber bottle, was the owner of Comber Distilleries. We like to think that in reviving both historic brands, we are not only restoring a cornerstone of Northern Ireland’s distilling history but are in some way reuniting the Bruce brothers, at least in spirit.”