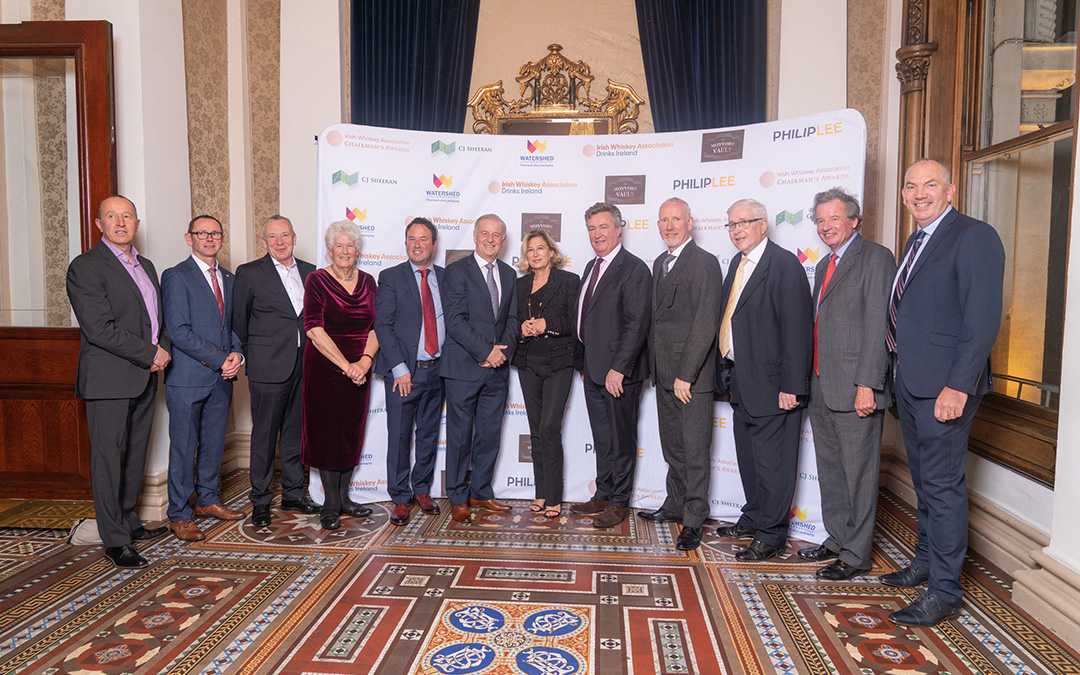 This year’s event took the form of a fabulous gala dinner in the prestigious Westin Hotel in Dublin and was attended by members of the Irish Whiskey Association, members of the trade, past recipients of the awards, and Minister for Agriculture, Food and the Marine, Charlie McConalogue, TD.

The event was introduced by Head of the Irish Whiskey Association, William Lavelle, and hosted by outgoing chairman, John Quinn. John is a veteran of forty years in the industry and retired Global Brand Ambassador for Tullamore D.E.W. John’s integrity, professionalism and wonderful sense of homour have garnered the admiration and respect among his peers and the public at large. Throughout his chairmanship he has driven positive change within the sector, succeeding in the challenges of Covid and Brexit. We thank him for his fabulous contribution and wish him every success in his semi-retirement.

Eight Irish whiskey industry figures who have made outstanding contributions to the sector were recognised at the Irish Whiskey Association’s Chairman’s Awards ceremony, which took place yesterday evening (17.11.22) at the Westin Hotel in Dublin.

The Chairman’s Awards take place biennially and were awarded this year by the Association’s outgoing Chairman John Quinn, Global Brand Ambassador with Tullamore D.E.W. The event brings together people, distilleries and industry partners from the Irish whiskey sector.

Minister for Agriculture, Food and the Marine, Charlie McConalogue, TD, were among the guests in attendance to honour the awardees.

“The Chairman’s Awards is a key occasion in the life of our industry. Every two years we get an opportunity to recognise the outstanding contribution made by individuals who have blazed a trail for the Irish whiskey industry. This year, as one of my last acts as Chair of the Irish Whiskey Association, I am privileged to honour our latest awardees.

“The awards are a wonderful opportunity to salute key individuals from across the industry; people from the past and present whose impact on the global success of the Irish whiskey category has been huge for many reasons, but whose enormous contributions will stand the test of time for long into the future.”

The Chairman’s Awards 2022 awardees are:

In addition, two posthumous awards were awarded to:

The Irish Whiskey Association Chairman’s Award 2022 was kindly sponsored by the following companies: