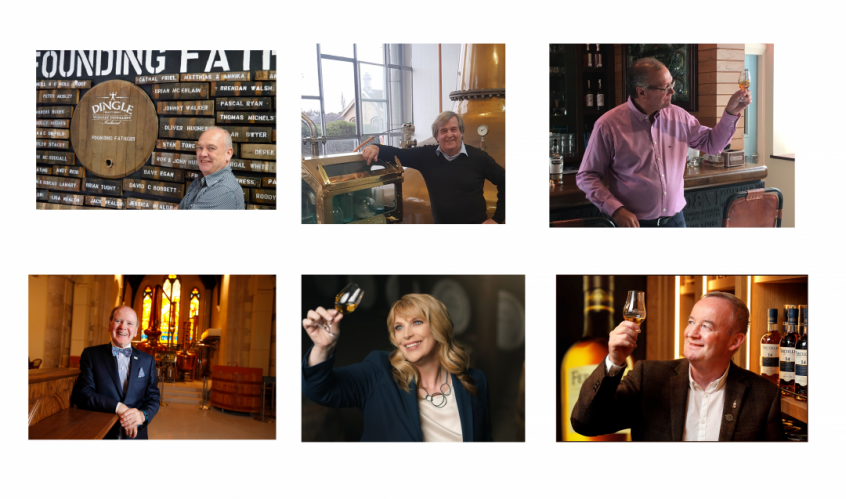 Six individuals who have made outstanding contributions to the Irish whiskey industry were recognised by Drinks Ireland|Irish Whiskey at their Chairman’s Awards which took place virtually yesterday evening (26.11.20) at 6pm.

Drinks Ireland|Irish Whiskey is the representative association for the Irish whiskey industry. The Association’s Chairman’s Awards take place biennially and will be awarded this year by outgoing Chairman David Stapleton, founder of The Connacht Whiskey Company. The awards recognise the people, distilleries and industry partners that have made an outstanding contribution to the development of the Irish whiskey industry and category.

“I am honoured to present the Chairman’s Awards to such a talented and tenacious group of people who have contributed significantly to the revival of the Irish whiskey industry. The awardees represent the dynamism and ingenuity which is central to our industry.

“It is fitting that we will present posthumous awards to two people of tremendous quality who have left a remarkable legacy on the Irish whiskey industry. I am also delighted that this year marks the first time a woman will receive a Chairman’s Award, which is reflective of the growing number of women working in the industry.

The Chairman’s Awards 2020 awardees are:

Billy Leighton, Master Blender, Irish Distillers: As Chief Blender to the largest producer of Irish whiskey, Billy has been at the very heart of the Irish whiskey revival and renaissance. Billy has played a pivotal role in delivering great and complex Irish whiskeys, including one he is most synonymous with: Redbreast. Billy said:

“I am honoured to accept the Chairman’s Award from the Irish Whiskey Association. Having worked in this industry for almost 45 years, it has been a pleasure to watch Irish whiskey thrive on the world stage and regain its rightful place amongst the world’s leading spirits. I know I speak for myself, and colleagues past and present at Midleton Distillery, when I say how proud we are of what the industry has achieved through dedication and craftsmanship. It’s been a pleasure to create some of the world’s most enjoyed Irish whiskeys and I look forward to the future as we continue to innovate and push the boundaries of the category.”

Helen Mulholland, Master Blender, Old Bushmills Distillery: Helen began her journey to the role of Master Blender, crafting the Bushmills blends and the renowned 10, 16 and 21-year-old triple-distilled single malts. Helen has blazed a trail for women in the industry. She is the first woman to receive a Chairman’s Award and has inspired many women in the industry in distilling, scientific and technical roles. Helen said:

“Over my time in the industry global volumes of Irish whiskey have increased sevenfold and continue to grow steadily. The number of distilleries on the island of Ireland have gone from three to more than thirty!  I could not feel more privileged to be in involved in such an unprecedented transformation.”

Noel Sweeney, Master Distiller, Powerscourt Distillery: Noel started his career as quality control manager at Cooley Distillery in 1989. He rose through the ranks to become master distiller and blender of both Cooley and Kilbeggan Distilleries. He played a leading role in the establishment of Drinks Ireland|Irish Whiskey. In 2017 Noel was inducted to the World Whiskey Hall of Fame, and in the same year he joined Powerscourt Distillery leading the development of what has become one of the most impressive new distilling operations in the industry. Noel said:

“Since I started in the industry, Irish Whiskey has been turned on its head. As a Master Distiller I am proud to be part of an innovative wave that moved Irish whiskey beyond just triple distilled, non-peated expressions. We have since seen a rapid and exciting increase in new releases of interesting, high quality Irish whiskey, with much more to follow. Our industry is one of great resilience, ingenuity confidence, and creativity, and I look forward to a bright future for Irish whiskey.”

“In  my time in the Irish Whiskey industry it has been transformed from a single participant selling two million cases in Ireland, Britain and the USA, to multiple participants, each with their own strengths, selling twelve million cases, much of it in new markets.  Many of those new entrants were facilitated by a supply of whiskey from Cooley, and now GND, allowing them to overcome a major barrier to entry.  It is gratifying to have made even a small contribution to that transformation.”

In addition, two posthumous awards will be awarded to:

“Pearse would be so honoured to receive this recognition, which is perhaps more meaningful than any other. Although he traveled the world and worked in several industries, his heart was always in Ireland and in distilling. As he raised a glass of whiskey at the opening of Pearse Lyons Distillery in August 2017, he was fulfilling a dream that was bigger than himself. A descendant of five generations of Irish coopers, he was furthering his family’s legacy.”

Oliver Hughes, Founder of Dingle Distillery: Oliver and colleagues made a decision that was to be a pivotal first in the Irish whiskey renaissance in 2012, establishing a distillery in a redundant sawmill in Co. Kerry. Sadly, Oliver passed in 2016 aged only 55. The award will be accepted by the Hughes family. Elliot Hughes, son of Oliver Hughes said:

“Oliver’s impact on Irish whiskey was all too brief yet incredibly significant. Oliver’s belief that small, family owned artisan distilleries should be at the heart of this industry and his desire to achieve that with Dingle Distillery helped pave the way for many of those who followed. Oliver’s legacy will forever be the Dingle Distillery; the whiskey, the place and the people he sadly left behind”

“I would like to congratulate all of the awardees and thank them for the sustained and positive contribution they have made to our industry. 2020 has been a tough year for everyone – including the Irish whiskey industry. However, the industry has proven itself to be resilient in the past – and will do so again. After decades of decline in the 20th Century, we have experienced a remarkable recovery. I am confident we will bounce back and see Irish whiskey distilleries across the country grow from strength to strength in 2021.”