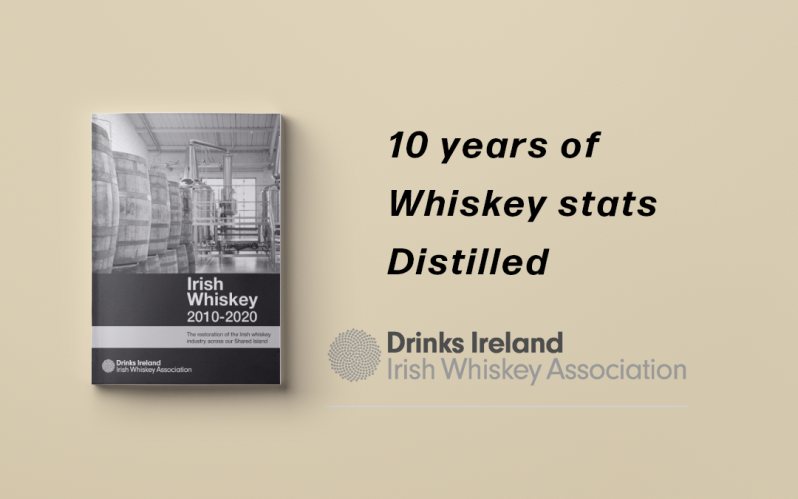 Drinks Ireland|Irish Whiskey Association have today released a comprehensive report on the contribution of Irish whiskey to the Irish economy over the last decade. The report also looks to the future and how Irish whiskey can maintain it’s growth. Link to report at end of post.

They have issued following Press Release :

The Irish industry invested €1.55 billion in the all-island economy from 2010 to 2020, while the value of Irish whiskey exports from the island of Ireland reached €890 million in 2019, according to a report published today (04.12.20) by Drinks Ireland|Irish Whiskey Association.

The report, ‘Irish Whiskey 2010-2020: The restoration of the Irish whiskey industry across our shared island’, was launched today by Minister for Finance, Paschal Donohoe TD.

Key statistics on the industry’s performance over the past decade – as highlighted in the report – include the following:

“This report demonstrates the strength and resilience of one of our island’s oldest industries. Today is an opportunity to celebrate the revival and renaissance of the industry, its contribution to the island’s shared economy, and the achievements of all those involved.”

The report outlines how distillery developments have made a tangible and substantial contribution to local economic regeneration and to the social fabric of urban and rural communities throughout the island of Ireland.

“In 2010, there were just four distilleries operating on the island of Ireland. Now, only 10 years later, we have 38 distilleries working in towns and villages throughout Ireland, creating jobs, attracting visitors and resulting in the restoration of distilling to areas which once had rich traditions in whiskey production.

The report also looks to the future, assessing the opportunities and challenges for Irish whiskey in coming years.

“Irish whiskey can look forward knowing there are still many opportunities out there, from the potential that market diversification offers in terms of growth in Asia and Africa, to the opportunities on offering from the emergence of e-commerce as a major new sales channel for spirits.

“However, our industry also faces challenges, from the declining spring barley base in Ireland to the threats posed by protectionism and the divergence Brexit will bring to our all-island industry. Our industry has proven to be resilient and we will get through these.”

“The report launched today gives us an opportunity to pause and reflect on how the industry has grown in just one short decade. But, in doing so, our gaze is firmly fixed on future horizons.

“2020 has been an extremely difficult year. However, the Irish whiskey industry has proven itself to be resilient. After decades of decline, we have experienced a remarkable decade of recovery between 2010 and 2020. That recovery will continue. The industry is ready to bounce back in 2021, and march into the next decade with a focus on the continued growth of Irish whiskey sales.”

“The performance of the Irish whiskey industry over the last decade charts an extraordinary path of success. From the growth in the number of distilleries, which has done so much to ignite, or in many cases re-ignite, a passion for Irish whiskey, to the value of investment across the island and in local communities, which has brought new jobs to many of our region, this sector reflects, to a large degree, the journey we have been on as a country over the past ten years. This year, however, has presented more than its fair share of challenges, with very few sectors spared. I have no doubt though that the future remains exceptionally bright for Irish whiskey, which is revered and enjoyed the world over, and I wish the sector every success in building on this report and increasing the value of the sector further in decade ahead”.

The ‘Irish Whiskey 2010 – 2020: The restoration of the Irish whiskey industry across our shared island’ report can be downloaded here.