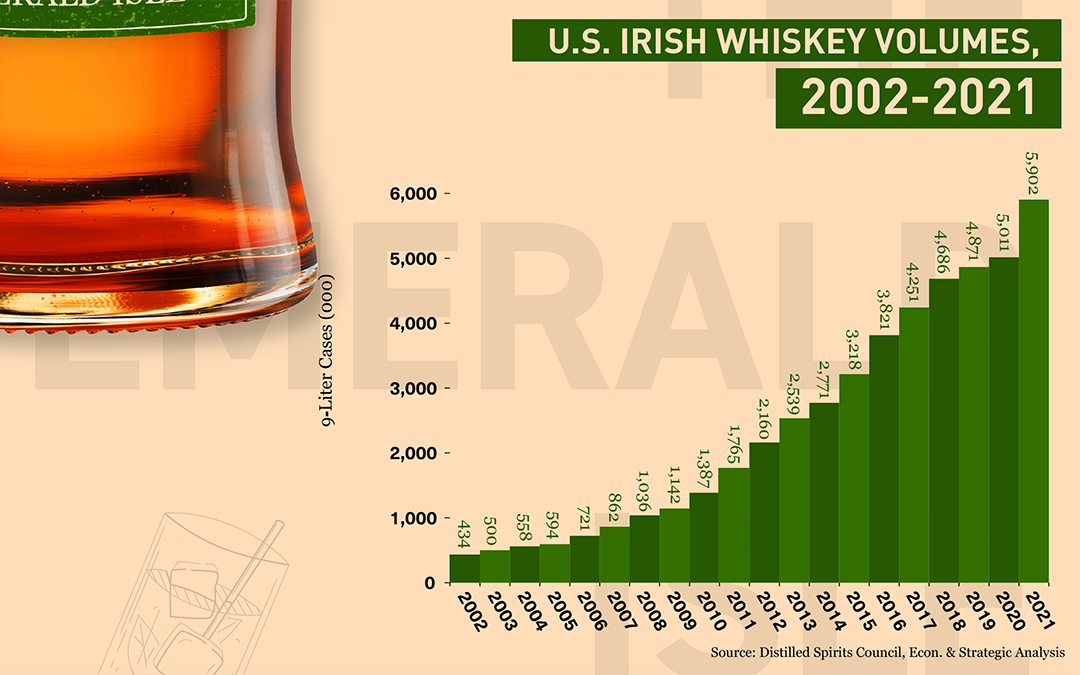 The Irish Whiskey Association has acknowledged figures from its partners in the Distilled Spirits Council of the United States, DISCUS, which reports that: “The Irish whiskey category has benefited from drinkers’ desire to ‘trade up’ from premium to high-end and super-premium products.”

“While Irish whiskey has been the world’s fastest growing spirit since 2010, this growth has primarily taken place at standard price points. This is changing, as more and more consumers are turning to Irish whiskey as their luxury whiskey of choice.

“With more supply coming available of age-statement, super-premium brands – from both established and newer distilleries – it is clear that Irish whiskey is going to be an increasingly important player at the higher end of the whiskey market, becoming a real alternative to Scotch single malts.”

The increased supply of age-statement Irish whiskeys is being led by Bushmills Single Malts and Redbreast Single Pot Still.

“Bushmills Single Malt is at the heart of everything we do. In 2021, we saw strong momentum for our core aged range, with sales growth far in excess of the global single malt category trend. The success of our second wave of Causeway Collection single malt, limited edition, prestige releases is a clear testament to consumers’ passion for Bushmills worldwide.”

“The Irish saying ‘an rud is annamh is iontach’ means that ‘the thing that’s seldom is wonderful’ and this is particularly true in the context of Irish whiskey, presenting a real opportunity for the industry as premiumisation continues to gather pace. More and more consumers are continuing to show their appreciation for our single pot still portfolio, led by Redbreast, the world’s most awarded single pot still whiskey, which had record volume growth in the first half of fiscal year 21 (+19%). We are confident that the quality and variety of our broader portfolio, coupled with the shift in consumer appetite towards more premium and super-premium Irish whiskeys, will continue to support growth around the world.”