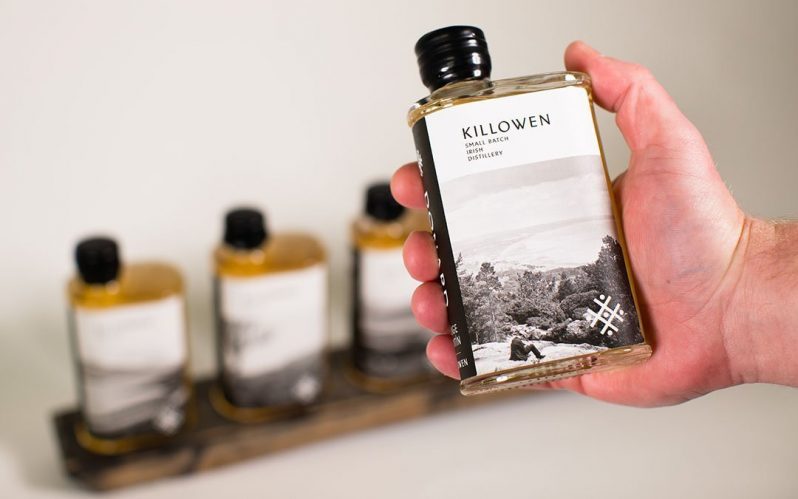 Killowen Distillery launches a limited edition (192 sets only will be released) premium series of poitín made up of five unique bottlings, aptly named Cuige. Killowen have set out to demonstrate that poitín can be premiumised and deserves to be a serious contender in the spirits world. The peated poitín set is presented on a hand-crafted pedestal, carved from a Killowen whiskey cask.

A spirit representing Ireland’s history and present, acknowledged her historical five provinces by finishing a unique poitín, in five different firkin casks from five select breweries, each representing those old provinces. The Irish word ‘Cuige’ meaning ‘provinces’ or ‘Fifths’ originated prior to the cessation of Meath as a province in the early 1600’s.

Those chosen breweries are

This unique peated mash bill offers a little more oat than Killowen’s core mash-bill, as a tribute to the integral part oat has played in Irish distillation history. After a 24-hour flame-fed, double-distillation, and worm-tub condensation, the spirit is laid in casks at full strength for 10 weeks, as is the maximum allowable time by law. Each bottle is painstakingly, hand-filled, hand-labelled, wax-dipped, and hand-written. Each set has its own unique rustic pedestal made from a Killowen cask stave which has been, heat-straightened, carved for bottles, engraved with the Killowen Cuige Logo and wax finished. This release truly is ‘Very Rare’. As usual, all your information is on the Killowen Label.

The names and Images for each bottle come from different locations carrying particular affection to Killowen Distillery, and places which Killowen think signify each Cuige.

Ulster: ‘Donard’ – The highest mountain in The Mournes – God’s country

Munster: ‘Mish’ – The Slieve Mish range to the east of Dingle peninsula

Read more about Killowen Distillery in issue 10 of our publication.