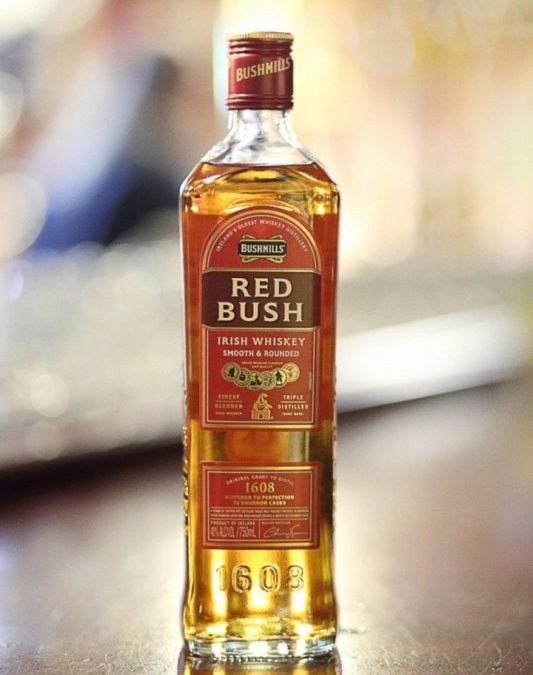 After almost five years without a new entry in their domestic product range, Bushmills has launched Bushmills Red Bush, a blend of triple-distilled single malt and Irish grain whiskey. Clearly aimed at a younger and newer audience, Red Bush is light and approachable whiskey, well-suited for cocktails and mixers, as well as a being taken neat.

Launched earlier in the year in the US, Bushmills Red was formally launched in Ireland on November 15 with an event in The Harp Bar, Belfast where Master Distiller Colum Egan shared his vision for their new entrant. Recognising their long absence from the domestic market, Colum hinted that there would be more releases to follow. Red Bush is matured in 100% first-fill, medium char, bourbon casks which deliver a deep lingering flavour of vanilla and caramel.

On the nose, the amber spirit offers intense aromas of toasted oak and vanilla. To taste, the first-fill medium char bourbon cask softens the spirit, allowing smooth and sweet notes of vanilla and caramel to emanate.

“While we’ve been innovating with our aged whiskeys for centuries, we’re excited to embark on a journey with the new whiskey drinker.” Luke O’Meara from the Liquor Rooms in Dublin, describes Red Bush as “a light, easy, and uncomplicated whiskey to sip. With sweeter hints of vanilla and demerara, Red Bush presents prominent bourbon cask influences which lends itself perfectly to classic cocktails like the Old Fashioned.”