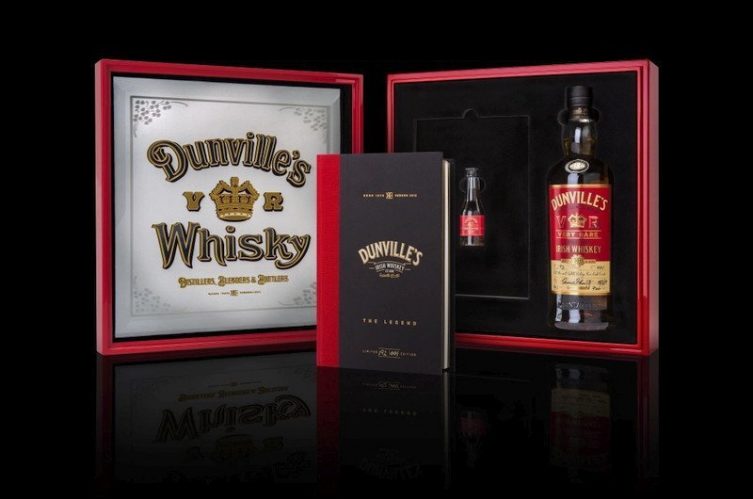 With four international awards already to its name, this Single Cask bottling is the jewel in the crown of the Dunville’s Irish Whiskey portfolio. It joins Dunville’s PX 12-Year-Old Single Malt, Dunville’s Three Crowns and Dunville’s Three Crowns Peated, which have recently been relaunched with new look bespoke bottles and gift packs. Joining the Dunville’s Very Rare range, the Rum Finish bottling is presented in an exquisite collector’s box, the contents of which have been carefully curated to reflect both Dunville’s rich heritage and the unique provenance of the rare rum casks in which the whiskey has been finished. In fact, the package includes a sample of the very same 41-year-old rum that was disgorged from the Port Mourant casks before Echlinville refilled them with single malt whiskey. An exciting proposition for any whiskey or rum collector.

“When Echlinville became the proud custodians of Dunville’s Irish Whiskey, we made it our founding goal to revive restore Dunville’s it to its rightful place among the premier whiskeys of the world. This latest release perfectly realises that goal and encompasses Echlinville’s ethos of tradition meets innovation.”

“Dunville’s VR 18 Year Old Port Mourant Rum Finish is the perfect marriage of mature Irish Single Malt and exquisite Caribbean Rum, having been masterfully finished in some of the last remaining casks from the famous Port Mourant Estate Distillery. “Founded in 1732, the Port Mourant Estate Distillery produced some of the world’s finest Demerara Rums. Each of their casks was lined with rich dark molasses treacle before being filled with rum from their iconic wooden still. The 2015 bottling of an exquisite 41-year-old Port Mourant Estate Demerara Rum presented us with a once in a lifetime opportunity to obtain eight of those exceptional casks, with a level of quality and provenance seldom seen in ex-rum barrels.

“From the moment we got our hands on these Port Mourant Estate casks we knew this whiskey was going to be very special indeed. The intensity of flavour that is so unique to these casks now resonates through the nose, palate and finish of our whiskey. “Layerings of sweet molasses, dark muscovado sugar and vanilla give way to stewed fruits, apple strudel, candied orange, cinnamon and clove, before those rum casks take over with crème brȗlée, banana bread and those sugars that combine with the malt’s natural oils to coat the mouth quite sublimely with pure treacle molasses, perfectly defining this magnificent whiskey.”

THE SPIRIT OF BELFAST

Speaking about the proud heritage of the Dunville’s Irish Whiskey brand, Jarlath continued:

“Originally produced at the Royal Irish Distilleries in Belfast, Dunville’s was among the world’s most iconic whiskey brands until production fell silent in 1936. “As custodians of the Dunville’s name, we are hugely proud of the brand’s rich heritage – a heritage that is celebrated in the beautifully ornate box in which our rum finish whiskey is presented. Alongside a replica of an original Dunville’s mirror, the box also includes a book detailing the story of the brand from its birth in 1808 until its rebirth here at Echlinville and beyond. “Today marks a new chapter in that story and we are very excited to see what lies ahead for The Spirit of Belfast.”

Nose – The first impression is equilibrium, the balance between spirit, rum and wood notes is exceptional. That subtle layering of sweet molasses over the magnificently clean barley leads into rich, oily, viscous aromas, a richness of red toffee apples, pear drops giving way to baked pear, sweet vanilla crème anglaise, and warm apple strudel. That same warmth that speaks to the cask strength of this whiskey, but with strength rather than burn. There is no suggestion of youth anywhere on the nose, this whiskey speaks well of its age and maturity.

Palate – Perfect texture, sweet oak layered with dark treacle molasses, thick dark muscovado sugar with sweet wood vanilla. Stewed fruits, candied orange, verging on marmalade, with hints of cinnamon, cloves, nutmeg and luxurious rum ice cream. Then comes the merest suggestion of smoke from the barrel char, and of old sun-dried leather that adds even more richness, depth and complexity to the whiskey. Finally, those rum casks take over, with sticky toffee pudding, well-done crème brȗlée, blue mountain latte, banana bread and rum ice cream carrying through to the finish. This is a whiskey that responds to warmth and develops in the glass.

Finish – Rich, oily and viscous, those sugars combine with the malts natural oils to coat the mouth quite sublimely with pure molasses, treacle and buttery barley.
Then there’s cream soda, candied orange, more wonderful banana bread and dark rum, and all the way through you have that perfect, breath-taking intertwingling of the molasses, the malt and that sweet oak, that reminds you in its last long lingering moments of the 18 years this whiskey has been waiting for this revealing, and so defines this magnificent whiskey.