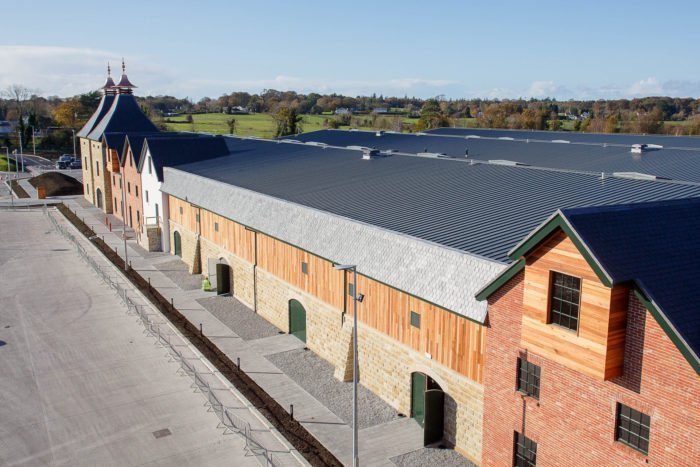 William Grant & Sons have invested a further €25m in the Tullamore D.E.W. site bringing its total investment in the distillery to about €60m. The investment has also
meant the creation of 80 jobs in the locality. In October the new grain distillery and state-of-the-art bottling plant were officially opened making it one of the world’s few ‘grain to glass’ whiskey operations.

There are also plans to increase the number of maturation warehouses currently on site. Simon Hunt, CEO of William Grant & Sons, said:

“As an independent, family-owned business we really care about the legacy we are creating. When we see potential, as we do here, we go all out to build and invest with a long-term perspective. Our work here in Tullamore perfectly captures this; the scale of investment is a reflection of our belief in the potential of Tullamore D.E.W. The completion of the site has brought the total production of this legendary whiskey back to one important location – the town of Tullamore. We are the second-largest Irish whiskey globally and the leading Irish whiskey in several important markets, but we believe there is much more to come for Tullamore D.E.W.”

The investment will mean that Tullamore D.E.W. will in time be self-sufficient and no longer have dependency on sourced spirit. The capacity of the grain distillery is approximately 14m LPA per annum and of particular interest is that the grain source for the new grain distillery is not maize, rather it will use wheat, much as is the case in Scotland and as was the case in Ireland until the 1970’s. According to John Quinn, Global Brand Ambassador, the majority of this wheat will be sourced locally. What is particularly impressive is to reflect on how the grain distillery was completed in little over a year. Caspar MacRae,

“In the last three years, global sales of Tullamore D.E.W. have grown from 840,000 cases to over 1.1m. The quality of our blended whiskey, combined with the brand’s reputation and increased investment, puts us in a great position for further growth in 2018 and beyond.”