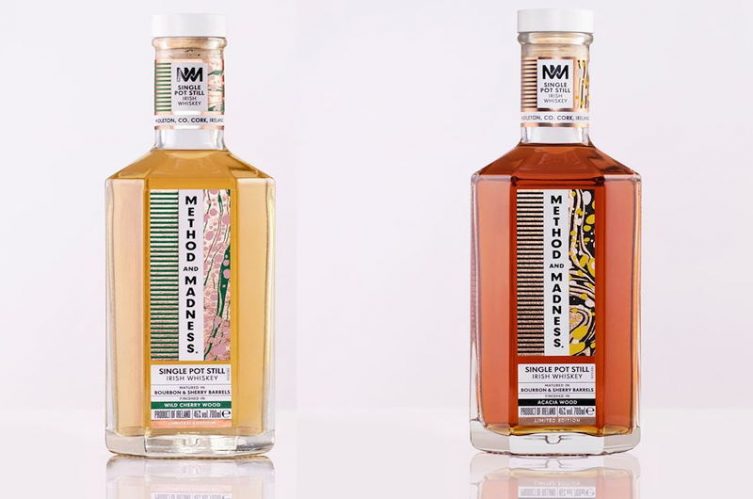 On Tuesday 3rd September Irish Distillers released two new releases in their experimental Method and Madness portfolio. The new releases exemplify the continuous innovation in the Irish whiskey category down in Midleton, Co. Cork. Both releases are Single Pot Still #IrishWhiskey which were initially the same base liquid but which were finished differently. Ally Alpine of Celtic Whiskey Shop & Wines On The Green hosted the launch in their multi-award winning store in Dawson Street, Dublin.  Kevin O’Gorman, (Master of Maturation) Distillery, Finbarr Curran (Wood Purchasing & Operational Planning), Larissa Marrichi (Distiller at Micro Distillery) introduced the two new releases. Each is limited to 2,500 bottles each. Bottled at 46% ABV and natural colour. Retail price for each is €92 and are available now.

The first announced was a single pot still Irish whiskey that has been finished in nine casks crafted from wild cherry wood, sourced from France, for between six months and four years. Wood from the cherry tree is characterised by its porosity which comes with its own set of challenges in terms of leakage and also overexposure to the wood which meant maintaining a very watchful eye over the maturation. There is significant interaction between the wood and the whiskey and has added complex flavours of shredded ginger, coconut and black tea to the ex-bourbon and sherry cask-matured whiskey. Kevin commented:

“Since 2014, our research into maturation in different wood types has challenged our expertise and approach to whiskey-making – but none so much as our experimentations with wild cherry casks. The rare, porous wood is different to anything that we have handled before, so it has been a real achievement to create the perfect balance of flavour – the result is a world-first in Irish whiskey, with a nose of coconut fibre and ginger, a palate of fresh green herbs, black tea and unmistakable pot still spices and a long, fresh finish with prickly spice and hazelnut.”

Available in six markets, including Ireland, the UK and global travel retail. 900 available in Ireland and the remaining 1600 in the other markets. The second of the new releases is a single pot still Irish whiskey that has been finished in barrels crafted from acacia wood, sourced from France, for between one and four years. Initially matured in a combination of ex-bourbon and Oloroso sherry casks, the dense acacia wood has a tight grain that slowly imparts rich nutty and chocolatey flavours and a dark mahogany hue.

‘Method and Madness aim to push the boundaries of Irish whiskey and the Irish spirits category through innovative releases and it has been a real honour to work closely with Kevin in order to craft these two new whiskeys. The density of the acacia wood presented a challenge in contrast to the wild cherry wood as the maturation process was much slower and required a close eye and nose to achieve the perfect balance. But it was well worth the wait. This stunning single pot still Irish whiskey has a nose of sugared almonds and wood spice, a palate of coffee beans, dark chocolate and chilli and a finish with fading spice, charred wood and barley husk.”

Available exclusively through the Celtic Whiskey Shop and their online store for worldwide delivery.