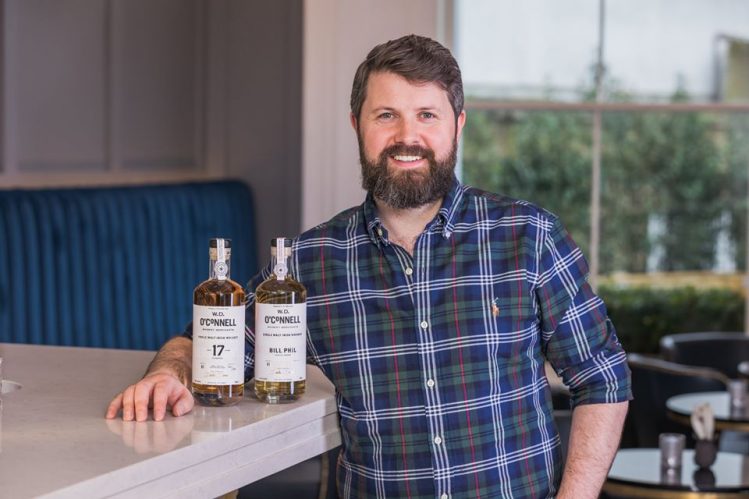 Following on from the successful launch of Ireland’s first triple-distilled peated single malt whiskey in over half a century at Whiskey Live 2019, W.D. O’Connell Whiskey Merchants are launching the next release in their Peated Series, Bill Phil Batch 01. Bill Phil Batch 01 (47.5% ABV) is a triple-distilled peated single malt Irish whiskey, which has been aged exclusively in first-fill bourbon barrels. Only 600 bottles of Bill Phil Batch 01 are available. It delivers distinctly peated, fresh charcoal bbq on the nose, revealing a sharp contrast on the palate, creamy texture, rich malt and citrus fruit flavours coming through with a delicate smokey mellow finish.

The name Bill Phil was inspired by the founder’s Great Grandfather, William Phillip O’Connell. A prominent blacksmith in West Limerick, William was famous for making a great slean (a tool for cutting turf). Known locally as Bill Phil, when it came to naming peated Irish whiskey, it was almost inevitable that it too would take the name of Bill Phil in his honour. Bill Phil Batch 01 is the second release from indie bottlers W.D O’Connell. Founder, Daithí O’Connell is striving to bring more variety to the Irish whiskey market by acquiring a diverse collection of spirit and cask combinations.

“Peat has a part to play in the Irish whiskey story, a big part. The last time we saw triple-distilled peated was possibly Hewitts from the Old Cork Distillery in the mid-’60s and then it wasn’t until the hugely successful double-distilled peated single malt Connemara Whiskey from Cooley that we saw it again. Being the first triple distilled peated single malt in over half a century is really something! Similar to the single cask offering of Bill Phil that was launched at Whiskey Live (2019), Bill Phil Batch 01 is bottled at 47.5% abv, aged exclusively in first-fill bourbon barrels and is once again sourced from John Teelings Great Northern Distillery, Dundalk. We believe this peated expression reflects our ambitions to offer something different in Irish Whiskey.”

Bill Phil Batch 01, the 600 bottles limited release is available online at www.wdoconnell.com and through all good stockists nationwide from Friday the 13th March at an RRP of €65.00.