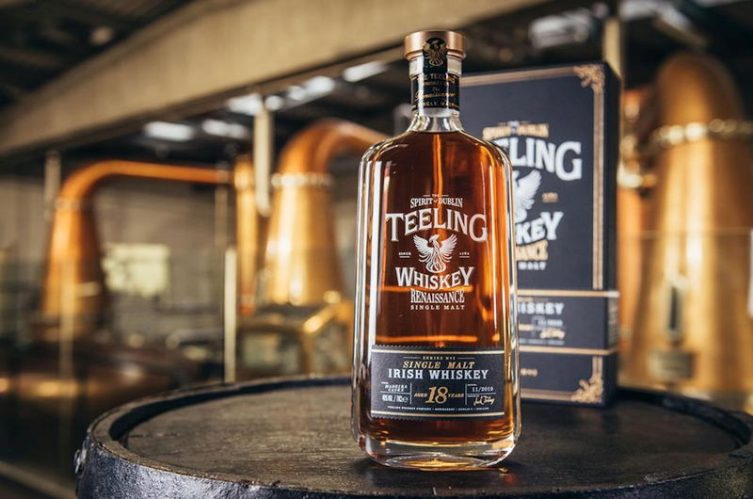 Teeling Whiskey, Ireland’s leading progressive Irish whiskey producer, is proud to unveil the first bottling of “The Renaissance”, a new limited edition series of unique Irish Single Malts. The new series is crafted to celebrate the true global Renaissance of Teeling, Dublin and Irish Whiskey as it continues to be the fastest-growing premium spirit in the world coupled with the vibrancy for the many new entrants to the category. The Renaissance Series is a follow on from the highly sought after and successful Revival bottlings, which were originally released to celebrate the opening of the Teeling Whiskey Distillery and with that, the revival of the tradition of distilling in Dublin.

The Renaissance joins Teeling Whiskey’s range of award-winning Irish Whiskeys, which have collected over 230 international awards over the last six years including the title of “World’s Best Single Malt” at the 2019 World Whiskies Awards. The first bottling of The Renaissance Series consists of 18-Year-Old Single Malt that was aged initially in ex-Bourbon barrels before being finished in high-quality ex- Madeira casks, imparting distinct hints of ripe red fruits and peaches with cinnamon and white pepper spices. Limited to just 9,000 bottles, the resulting Single Malt is then bottled at 46% with no chill filtration, a signature of all Teeling Whiskeys.

“We are delighted to launch the first release in our new Renaissance Series of aged Single Malts. The Revival Series was originally launched to celebrate the rebirth of distilling in Dublin back in 2015, so the timing is perfect to launch our new series, as we enter a period of Renaissance for distilling in the capital. As the first new distillery in Dublin for over 125 years, we have been leading the charge of re-establishing Dublin as the leader globally in urban distilling. With Dublin distilled Irish Whiskey now being exported around the world and a vibrant Dublin distillery quarter we look forward to contributing to and helping the continued Renaissance of Teeling, Dublin and Irish Whiskey.”

Bottled in a very unique tall decanter bottle, this bottle of Irish Single Malt stands tall and proud on any shelf. With an RRP of €140.00 for a 70cl decanter bottle in a gift box The Renaissance 18-Year-Old Single Malt will be available in Ireland at the Teeling Whiskey Distillery in Dublin 8, Dublin Airport, The Celtic Whiskey Shop and premium independent off licences for Christmas. In 2020 the Renaissance will be available in international markets such as Belgium, UK, Holland, France, Denmark, Italy and select Asian markets.