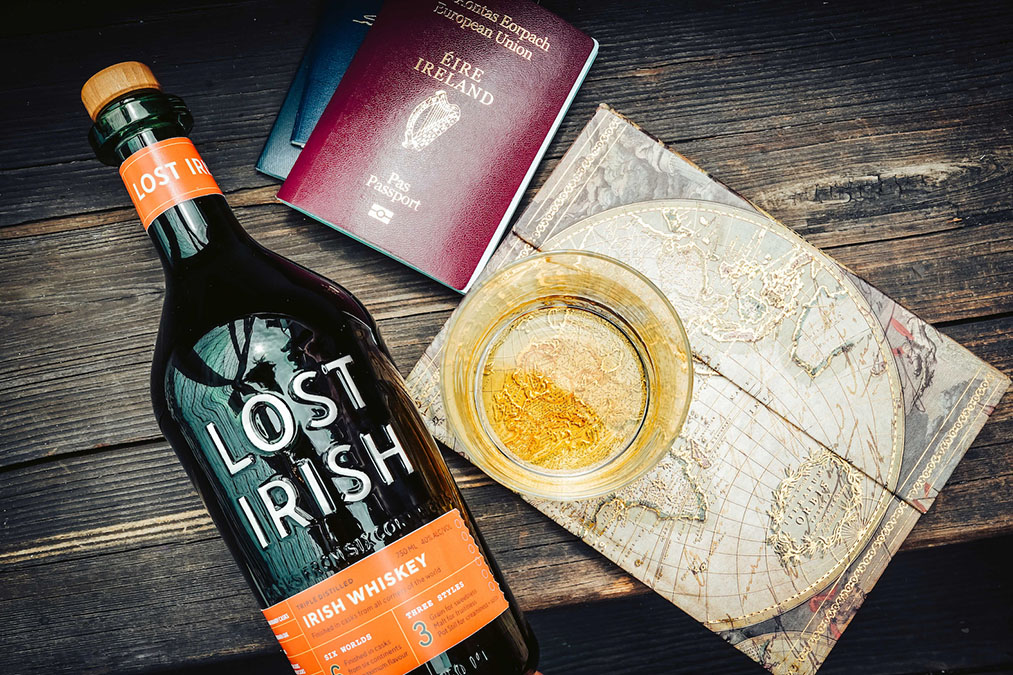 After a successful launch in the US, Lost Irish is now available in Ireland

Having experienced quick success in the US since launching in 2021, Irish whiskey Lost Irish has finally made its way home, launching in the Irish market this week.

Born in Ireland, lost in the world, Lost Irish is a contemporary, modern whiskey that is inspired by a wanderlust for world travel, adventure, and the many stories of the Irish across the globe.

Unmistakably Irish and inspired by worldly adventures, Lost Irish embodies the wandering Irish spirit and is made from six worlds in three styles. Emphasising the whiskey’s unique global influence, it is made using casks sourced from six continents around the globe: Asia, Africa, Europe, North America, Oceania and South America. With more than 70 million Irish dispersed throughout the same continents’ casks are sourced from, Lost Irish reflects Ireland’s true home: the world.

Bringing a complex and worldly flavour, Lost Irish is a blend of all three styles of Irish whiskey – grain, malt and pot still – making it very untraditional. The grain adds a distinct lightness to the blend with a sweeter taste and almost floral aroma. The malt adds a rich and rounded balance, which is fruity and soft. The addition of a classic pot still style delivers a full and creamy mouthfeel with a hint of peppery spice.

Founded by Irish childhood friends from Termonfeckin, Tim Herlihy and Neil Sands, Lost Irish is inspired by their experiences as proud Irishmen with a love for travelling the world. Bringing Neil’s creative entrepreneurial background together with Tim’s 10+ years involvement in Irish whiskey as an Irish whiskey ambassador and whiskey author.

Speaking about how they developed their whiskey, Tim Herlihy says, “The idea for Lost Irish stems from all my adventures around the world, paired with my love and appreciation of whiskey. While the category continued to grow, we recognised that it was now primed to evolve into something that is a true reflection of modern Irish.”

Supporting Tim and Neil in making Lost Irish a US success are their key players and US ambassadors Donna Stewart and Jack Murray. Donna, born in Boston, bred in Dublin now living in California, has a passion for Irish whiskey that cannot be rivalled but certainly matched by Kildare man Jack who was raised in Australia, now living in Austin, Texas. Each bringing their love of adventure and exploration together with their love of Irish whiskey.

With Tim living in New York, Neil and Tim made the decision to first launch their brand in the US market. An unusual and potentially risky move for an Irish whiskey.

“We wanted to launch in the US market first as we saw Lost Irish as an opportunity for us to share a more accurate view and reflection of Ireland with bartenders and drinkers around the world. Our brand was created as a result of our years of exploring, uncovering how the world perceives all things Irish and seeing how the Irish influence the world. It was this insight that helped us to create our whiskey and bring something unique to life.”

Having tasted success in the US, Tim and Neil are now excited to bring their contemporary, modern Irish whiskey home and introduce it to an Irish audience.

“Since launching in the US towards the end of last year it has been a whirlwind. We have been so pleased with the level of success achieved to date and the amazing reaction the trade and consumers have had to Lost Irish”, comments Neil Sands

Lost Irish has quickly made a name for itself in the US as one of the most exciting Irish whiskeys to enter the market. Just this week, it was shortlisted in the 2022 Spirited Awards ‘Best New Product and Cocktail Ingredient’ category. A first for any Irish whiskey and any Irish spirit.

The Spirited Awards, run by the Tales of the Cocktail Foundation, has become one of the industry’s most sought-after awards, celebrating global excellence in the drinks industry and recognising professionals, organisations, and establishments shaping the cocktail community worldwide. The judging panel includes respected bartenders, bar owners, educators, and writers from across the globe who draw on their years of experience to evaluate nominees from far and wide. A huge honour for an Irish whiskey to be nominated, let alone one who has only been in the market for six short months.

“But now we look to Ireland and are excited to see what the reaction to Lost Irish will be like here at home. We are proud of what we have created and hope that we’re doing the Irish proud over here in the US, but to get the support and success in Ireland would mean the world to us.”

Lost Irish will be making its debut this weekend at Ireland’s premier whiskey tasting event Whiskey Live at the RDS this Friday 10th and Saturday 11th June. Tim and his team will be introducing attendees to the newest and most exciting Irish whiskey to enter the market. So be sure to stop by, say hi and sample the whiskey that will have everyone talking this summer.

Lost Irish is exclusively available now from Celtic Whiskey, priced at €65 per bottle.