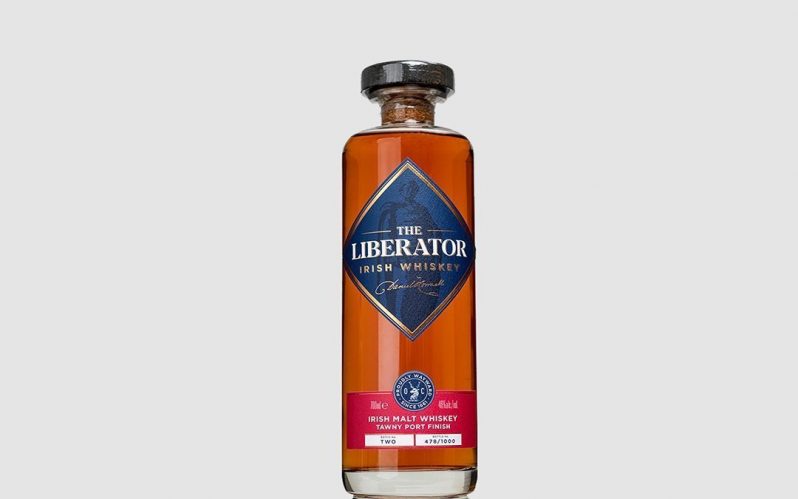 Wayward Irish Spirits is pleased to release Batch 2 of their Irish Malt Whiskey in Tawny Port Finish from The Liberator range of Bonded Whiskeys. Matured initially in first-fill American ex-Bourbon casks and then finished for 9-12 months in fresh ex Tawny Port casks, the Tawny Port finish contributes intensity, richness and complexity to the whiskey: figs, apple and pear on the nose, a rich taste of cocoa, clove and blackcurrant, and warming long finish.

Founder Maurice O’Connell says: “Despite the challenges of Covid-19, we’re thrilled with the response to the Inaugural Release earlier this year which is now almost sold out and are now releasing Batch 2. This is a limited release of 1,000 numbered bottles. Batch 2 has everything the Inaugural Release had but those extra 5 months have added to the roundness and balance. It is a vatting of single malts sourced from different distilleries: 22% is 2006 Cooley Single Malt, the balance is mostly 5 years with some 4-year Great Northern Distillery Single Malt. Bottled at 46% ABV, gently cut over 5-6 weeks, natural colour and not chill-filtered, the RRP is €65”.

“We have been working during the lockdown on a blended Whiskey. Our first release has an unusually high malt content (42%), has been finished in Tawny and Ruby port casks and is a light and approachable but characterful Whiskey with a likely RRP of €49. There will also be a small Cask Strength release in half bottles in response to enthusiastic demand from the Whiskey community. With pubs and bars closed, it’s been a challenge for people to taste and get to know our Whiskeys so we’ll be releasing miniature versions and have also started a partnering program with hotels”.

The Liberator Irish Whiskey celebrates the legacy of Daniel O’Connell, born in Kerry in 1775. The original campaigner for civil rights, heedless of race, gender or creed and often hailed as the greatest ever Irishman. Maurice adds:

“My forebear Daniel O’Connell’s independent spirit and sometimes wayward approach inspires how we craft whiskey at our family’s historic Lakeview Estate on the shores of Lough Leane in Killarney.”

Alongside The Liberator (bonded Whiskey), the Lakeview Estate grows its own barley and laid down its first casks in early 2019. Maurice explains:

“We are proud to be celebrating the 18-month birthday of our Single Estate Pot Still spirit and are working towards grain-to-glass distilling here in 2024”.

Just 1,000 numbered bottles of the Batch 2 of The Liberator Irish Whiskey Malt in Tawny Port Finish are available from 21 st August from leading suppliers including The Celtic Whiskey Shop and James Fox in Dublin, Fine Wines in Limerick, Carryout in Killarney and online through www.IrishMalts.com. Suggested retail price €65. Barry &amp; Fitzwilliam have The Liberator for wider release in Ireland.

Nose: Intense fruity aromas like dried cherries and figs, some pomegranate, freshly peeled citrus zests, spices like cardamom and long-pepper tickle the nose, the crispy malt in the background acts as a stable structure to achieve complexity.

Palate: First some roasted aromas from malt and hazelnuts, then undertones of a winey sweetness, again fruity but now more blackberries, dried kiwi and blood orange zests, the mouthfeel is smooth with a soft sparkle.

Finish: Warm and spicy with a bit of candied ginger, again long-pepper and citrus zests. Comment: Shows a mix of humble sweetness and spices, the soft mouthfeel makes it an easy sipping friend whose companionship you would like to enjoy more often.