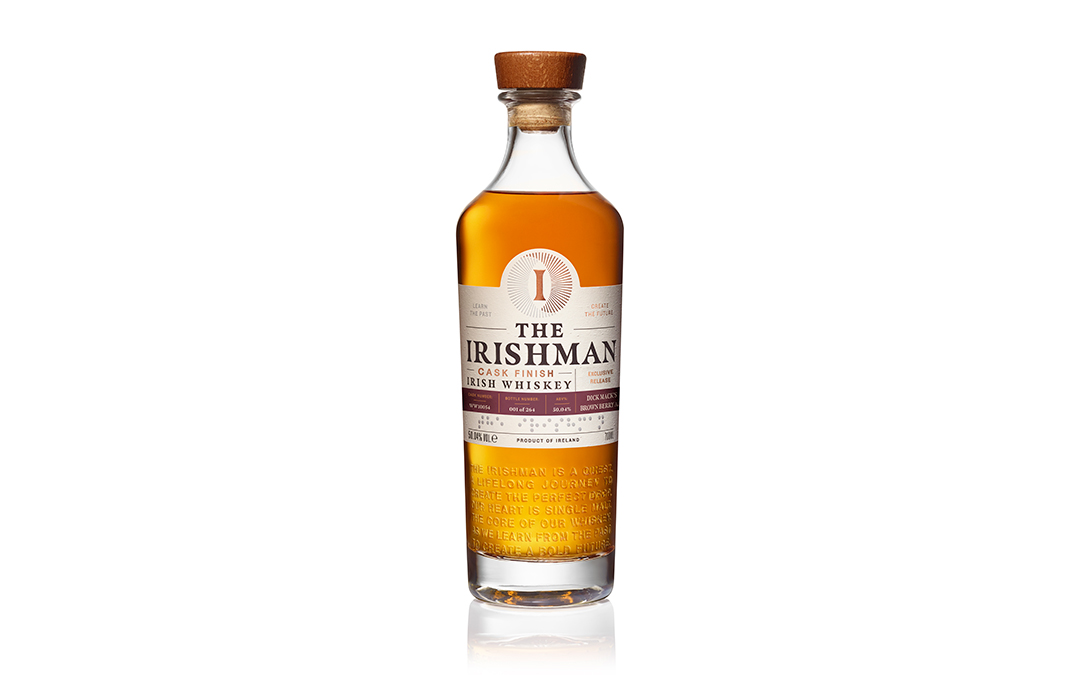 A new release of Irish whiskey born from the fourth collaboration between Walsh Whiskey and Dick Mack’s Brewhouse of Dingle. This limited release of just 264 bottles is a blend of single malt and pot still originally matured in Rum casks before being finished in Brown Berry Beer Cask from Dick Mack’s Brewhouse in Dingle. Bottled at cask strength of 50.04% ABV and non-chill filtered.

Two of Ireland’s leading artisan drinks-producing families, Walsh Whiskey of Carlow and Dick Mack’s of Dingle, have collaborated to create a once-off, super-premium Irish whiskey, finished in a rare craft beer cask. The Irishman – The Harvest Brown Berry Beer Cask Finish is a triple-distilled, non-chill filtered, marriage of aged Single Malt and Single Pot Still Irish whiskeys by Walsh Whiskey in Carlow. The cask originated from the Caribbean, Saint Lucia, where it first matured Rum for a few years before working its magic on Dick Mack’s Brown Berry Beer for 6 months. The Harvest whiskey was then aged for an additional 7 months in the distinctive Brown Berry Beer Cask from Dick Mack’s Brewhouse in Dingle. This rare single cask of whiskey is bottled at 50.04% ABV.

Just 264 bottles were produced of this incredibly rare Irish whiskey, with the majority pre-sold to members of the Friend’s of Walsh Whiskey – whiskey club.

It is the fourth collaboration between Walsh Whiskey and Dick Mack’s Brewhouse in the magical coastal setting of Dingle in south-west Ireland. Previous releases were The Irishman – Coffee Stout Cask finish (2018), Writers’ Tears – Seaweed IPA Cask finish (2020) and The Irishman – Peated Red Ale (2021).

“We love working with Finn (MacDonnell), his renowned whiskey adviser Peter White and Brewhouse colleagues, Graham Murray, Brian Murtagh, Aussie Barrett and Seamus Lynch. Together we challenge both ourselves and each other while knocking some craic [fun] out of each project. This sweet offering finished at cask strength packs a friendly punch.”

“Working with Walsh Whiskey we always conjure up the most exotic of combinations for the lucky few to explore and this expression is no different. Where else would licks of Caribbean rum kiss spicy pot-still Irish whiskey, wrapped in beer traces offering toffee, caramel and chocolate – and all in the one bottle?”