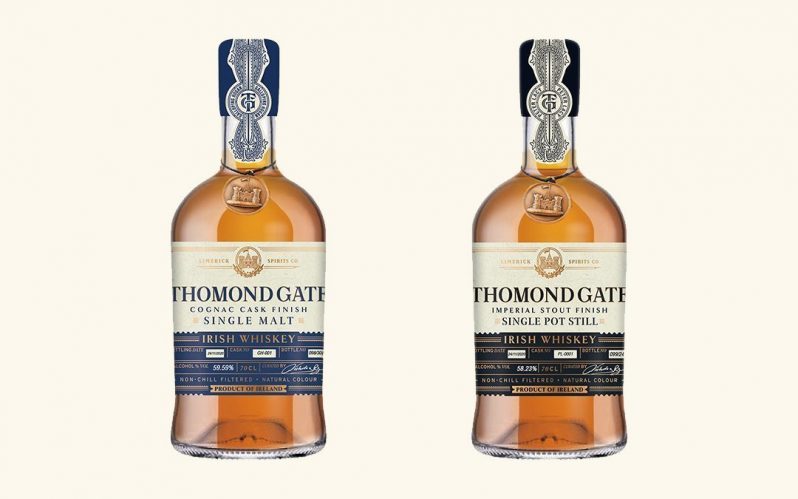 Almost a year to the date from their hugely successful inaugural release, Thomond Gate Irish Whiskey have released two limited edition bottlings, both at cask strength.

They have issued the following press release:

Inspired by past Limerick heroes, the new Peter Lacy and Galloping Hogan whiskey bottles have both been sourced and curated to combine Limerick’s history with its passion for distinguished spirits.

Thomond Gate Whiskey is extremely excited to release not one, but two new whiskies in time for Christmas this year as part of its new ‘Departed Spirits of Limerick’ series.

Exactly one year ago, on the centenary of The Thomond Gate Distillery closing its doors, new Limerick independent bottler, Thomond Gate Whiskey launched the first Limerick whiskey in 100 years. With its first 100 bottles selling out in less than 12 hours, there has been much excitement for it’s next release, which has been a closely guarded secret over the last year whilst in working progress.

The first new whiskey is in collaboration with fellow Limerick business, Treaty City Brewery. Carefully sourced and curated, the new ‘Peter Lacy’ Single Pot Still Irish whiskey has been finished in a French Oak cask, which originally matured a Bordeaux red wine from the Saint-Emilion region and then Treaty City Brewery used the cask to make its limited edition Imperial Stout.

After three years resting in the wood, the cask was emptied and filled with a Single Pot Still Irish Whiskey. This has been matured in a first fill ex-Bourbon cask and has now been bottled under bond, uncut and unaltered.

The second whiskey, Galloping Hogan, is a Single Malt Irish Whiskey, which has been finished in a French Cognac hogshead cask. This cask was crafted from the finest French Oak, naturally seasoned for two years in the south west of France and gently flame toasted to release the natural character of the wood, then filled with double distilled Ugni Blanc Unieaux-de-vie from the Cognac Region.

After two years, the cask was disgorged and transported to Ireland where it was filled with Single Malt Irish Whiskey. This has been matured in a first fill ex-Bourbon cask and has now been bottled under bond, uncut and unaltered.

“In a new golden age, we believe Limerick should be known again for its whiskey. As an independent bottler, we have taken the first steps to restore Thomond Gate Whiskey. We have sourced and curated an Irish whiskey where we have taken inspiration from the past, with a nod to honouring the tradition but not bowing to it. If you believe as we do, that Limerick should be known again for its whiskey, tell others what we are doing and help us restore our lost whiskey heritage around the globe.” 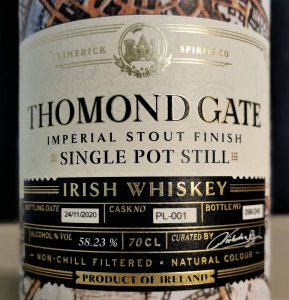 The first new release from Thomond Gate Whiskey as part of its ‘Departed Spirits of Limerick’ series pays homage to a prolific military General known as Peter Lacy, of Killeedy, Co Limerick. After the Treaty of Limerick in 1691, he left Ireland with other exiled Jacobite soldiers. In his later campaigns he joined Tsar Peter (the Great) of Russia and became one of the most renowned tacticians in Russian history winning many battles across the European continent.

In memory of Peter Lacy, Thomond Gate Whiskey has sourced a traditional Pot Still whiskey, which has been finished in an Imperial Stout cask from Treaty City Brewery. This style of beer, also known as Russian Imperial Stout, was exported in great volumes during the 18th Century to Russia. Brewed to a high strength so the beer could last the ocean journey, it’s an intensely flavoured, dark, full-bodied beer with lots of chocolate, coffee and dried dark fruits, which perfectly compliments the characteristics of Irish Pot Still whiskey.

Peter Lacy is a limited release of only 232 bottles at cask strength (58.23% ABV) with non-chill filtration and natural colour making this as close to drinking directly from the cask as possible. Handled with care and filled with passion, each bottle has been hand filled in 70cl bottles, labelled and adorned with a unique coin engraved with the individual bottle number making it a truly memorable experience for whiskey enthusiasts and collectors alike. 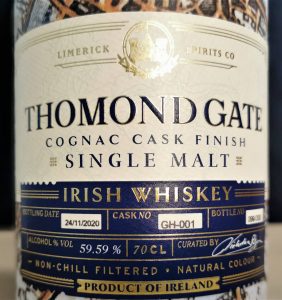 The second new release from Thomond Gate Irish Whiskey as part of its ‘Departed Spirits of Limerick’ series, we pay homage to a rebellious hero known as Galloping Hogan, from the parish of Doon, Co Limerick. In 1690, this infamous rapparee, along with Patrick Sarsfield and 500 Jacobite troops, successfully lead a daring ride to Ballyneety to blow up a Williamite siege train. Galloping Hogan refused to accept the Treaty of Limerick in 1691 and left Ireland the following year to become a General in the French Army.

In memory of Galloping Hogan and the French involvement in the siege of Limerick, we have sourced a Single Malt Irish Whiskey, which we have finished in a French Cognac cask. This gives the whiskey a warming spice, with gentle vanilla, brown sugar and biscuit taste with a hint of dried flowers, green apples and orchard fruits.

Available only as a limited release of 288 bottles, Galloping Hogan has been bottled at cask strength (59.59% ABV) with non-chill filtration and natural colour meaning this whiskey is as close to drinking directly from the cask as possible. Filled with passion and lovingly produced, each bottle has been hand filled in 70cl bottles, labelled and embellished with a unique coin engraved with the individual bottle number making it a truly memorable experience for whiskey collectors and enthusiasts alike.