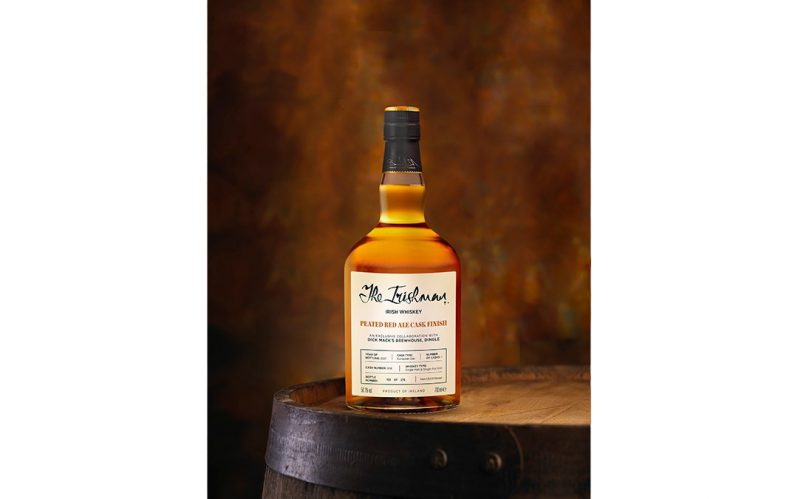 The third collaboration between Walsh Whiskey and Dick Mack’s Brewhouse.

Two of Ireland’s leading artisan drinks-producing families have collaborated to create a once-off, super-premium Irish whiskey, finished in a rare craft beer cask. The Irishman – Peated Red Ale Cask Finish is a triple-distilled, non-chill filtered, marriage of aged Single Malt and Single Pot Still Irish whiskeys by Walsh Whiskey in Carlow. The whiskey is aged for an additional 9 months in a Peated Red Ale Cask from Dick Mack’s Brewhouse in Dingle and bottled at 50.1% ABV.

Just 276 bottles were produced of this incredibly rare Irish whiskey, with the majority pre-sold to members of The Irish Whiskey Society, Dublin Fire Brigade Whiskey Club and Carlow Whiskey Society. It will be served to patrons of the legendary Dick Mack’s Pub in Dingle, and a limited allocation of just 120 bottles will be available for sale from James J. Fox of Dublin from the first week in July. This unique whiskey (single cask) has a recommended retail price of €79.99.

It is the third time that Walsh Whiskey has collaborated with Dick Mack’s Brewhouse to create a unique whiskey. Previous releases were The Irishman – Coffee Stout Cask finish (2018) and Writers’ Tears – Seaweed IPA Cask finish (2020).

“Finn (MacDonnell), his whiskey adviser Peter White and his Brewhouse colleagues, Graham Murray, Brian Murtagh, Aussie Barrett and Seamus Lynch are our partners and friends in innovation. As well as creating delicious concoctions, we always knock great fun out of our collaborations. I am very proud of this peated red ale finish to our The Irishman Founder’s Reserve whiskey, reinforcing our belief to always give more.”

“With three unique bottlings together with Walsh Whiskey so far, we seem to be doing something right with these special creations. The only problem being that we risk losing a few friends given the number of people looking to buy the whiskey before it’s even in the bottle! Can nobody keep a secret in Dingle? We won’t let that stop us though, as we have plenty more ideas that need exploring with Bernard!”

Finish:
Like a log fire burning slowly at the end of the night. Glowing embers of warmth.