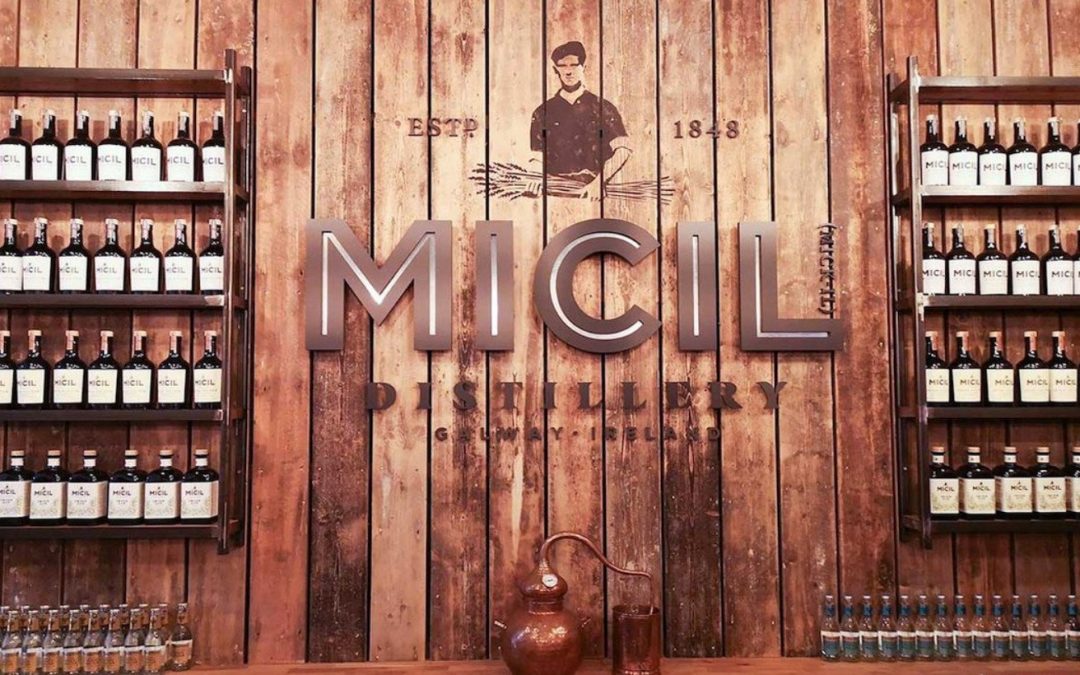 Micil is now adding Irish whiskey to its existing Poitín and gin portfolio. Today they issued the following press release:

To celebrate Saint Patrick’s Day, Micil Distillery is delighted to announce that they’re distilling & laying down the first Galway whiskey in over a century. Sixth generation Connemara distillers Pádraic & Jimín Ó Griallais are following a family tradition going back over 170 years, when their great-great-great grandfather, Micil Mac Chearra, began distilling on a hillside in South Connemara.

Despite the continued challenges in 2021, Micil, already renowned for their Poitín & Gin, are now adding whiskey to their repertoire and also creating new jobs within their team in Galway. While their own whiskey matures, they’re releasing two initial independently bottled Irish whiskeys in the Summer of 2021.

Micil Irish Whiskey will be shaped by applying their illicit distilling heritage and experience to explore the boundaries of Irish Whiskey making.

Galway has always been unique in the history of Irish whiskey, as it can boast not one but two great distilling traditions. The county was home to the many large distilleries of the city and its surrounding towns, and during the late 1700s there were 22 distilleries in Galway. The city’s importance as a port with historic wine and sherry trade links to France, Spain and Portugal provided the distilleries with a wealth of casks to choose from when it came to aging and finishing their whiskey. But the region was also home to the renowned poitín makers of Connemara, illicit distillers who played a constant game of cat and mouse with the excise men and the forces of ‘the crown’.

The barley, oats, wheat and rye traditionally used for poitín distillation have historically coincided with those used in the making of whiskey, and the distilling techniques employed to make both have much in common. Before cask aging was introduced, poitín and whiskey were essentially the same spirit, separated only by the buying of a license. Indeed, poitín is known as ‘fuisce’ in the Irish language still spoken in South Connemara today, while the legal spirit is known as ‘parliament whiskey’.

In 1911 the last of the great Galway distilleries closed its doors at Nuns Island, and legal whiskey production ceased in the county. However, poitín/’fuisce’ distilling continued in Connemara as it always had, and the old methods were preserved & handed down from generation to generation through the Irish language. Thus the Galway distilling tradition was kept alive, and the Micil legacy was born.

The Rebirth of Galway Whiskey at Micil

Celebrating the rebirth of whiskey distilling in Galway, Pádraic comments

“I founded Micil Distillery in 2016 in honour of my great, great, great grandfather Micil, with the dream of being the first in my family to distil legally. The success of Micil Irish Poitín, Micil Heritage Peated Poitín, and the multi-award-winning Micil Irish Gin has enabled us to move into the next phase of our growth plan and begin laying down Irish whiskey. In January 2021 we filled our first casks with the new make spirit which will be Galway’s first Irish whiskey in over a century. Our family has over 170 years of craft distillation knowhow, the longest continuous family distillation heritage in Ireland, and it brings us tremendous pride to be building on this legacy by bringing Irish whiskey back to Galway.’’

‘‘Our production capacity is perhaps the smallest of any whiskey distillery in Ireland. With our small single copper pot still, we can only produce a maximum of 1 standard 200 litre cask per week, compared with the approximately 30 casks per week produced by some of the better known ‘small’ Irish distilleries and the thousands of casks a week produced by the likes of Jameson and Bushmills. Our production methods are painstakingly slow, and we do everything by hand with no automation. Our focus is purely on distilling spirits of exceptional flavour and quality, not on yields or profit margins.”

Our first runs have been peated single malts, using 100% Irish barley, malted using Connemara turf from our family farm in Inverin. But as we ramp up production we plan to continue to innovate, bringing the creativity and resourcefulness of the Connemara poitín distiller to the whiskey category. Our whiskeys will draw heavily on our 170 years of distilling knowledge, our historic mash bills (recipes), and our Connemara terroir & provenance.”

While their own Galway whiskey matures for the legal minimum of 3 years, Micil plan to release two independently bottled Irish whiskeys in the summer of 2021 to give consumers an immediate opportunity to connect with whiskeys influenced by them. Head distiller Jimín points out that

‘‘In an industry with its fair share of smoke and mirrors, it was imperative to us that we were distilling our own Irish whiskey here in Galway before releasing a product that we haven’t distilled ourselves, though we’re obviously finishing it in our own casks. Three years is a long wait, and in the meantime we wanted to give people a small taste of what’s to come. The important thing is to be transparent about things like this, and that’s where we’ve seen other spirits companies fall short. It means a lot to us, we’re first and foremost distillers after all. It’s in our DNA”.

As their portfolio grows so too does the business, and Micil are delighted to be creating new employment opportunities in a part of the country that can sometimes get overlooked. Pádraic remarks:

‘‘We’re delighted to be at a stage where we can expand our team and create new jobs, especially when there’s been so much bad news for people over the last year or so. To date it’s been a core of just myself, my brother Jimín and my co-founder Ross, and it’s been hard going for us at times with lots of long days and sleepless nights, in an industry dominated by huge multinationals with limitless funds. But we recently hired Mark McLaughlin, one of Irish whiskey’s leading brand specialists, and are currently in the process of recruiting a global sales manager for the business as well. These new additions to our team will provide valuable skills & experience as we grow, and further our ability to achieve our goals’’.

2021 will be Micil Distillery’s busiest year to date as they take their first (legal) steps into the Irish whiskey category and begin to export to international markets. Along with expanding their team and building their portfolio they are working hard behind the scenes, developing new platforms for consumers to join their journey and seeking out investment to solidify their growth plans.

“This will not be the only good news from Micil in the coming months.” says Pádraic. “We’re working on lots of exciting projects and are looking forward to very soon welcoming members of the public to come on board and join us as part of ‘Pobal Mhicil’, the Micil Community. Watch this space!’’

Micil Distillery is Galway’s only operational distillery, producing Galway’s first whiskey in over a century. The distillery is headed up by brothers Pádraic & Jimín Ó Griallais, sixth generation Connemara poitín distillers and direct descendants of Micil Mac Chearra, the family’s original distiller. For over 170 years the family craft has been handed down through each generation using Irish, which is still the spoken language at the distillery today, and the Micil family represents Irelands longest unbroken family distilling tradition.