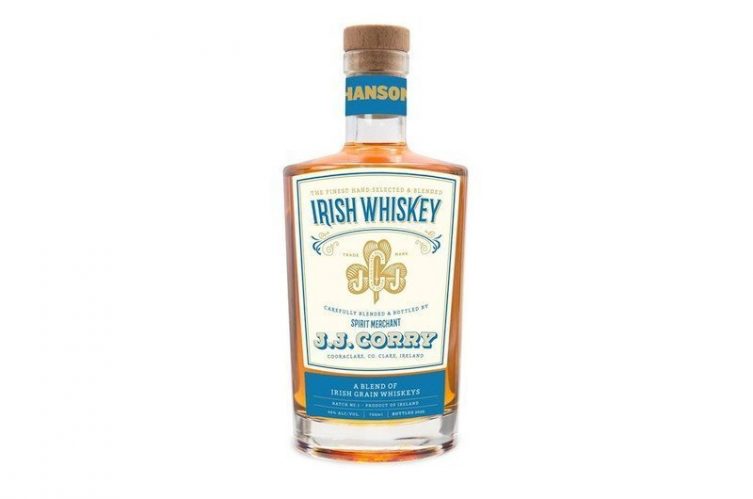 The release is comprised of a blend of four and ten year old grain whiskeys from different Irish distilleries married together. The Hanson is bottled at 46% abv without any artificial colouring or chill-filtration. It will be available to purchase from IrishMalts.com from Friday May 1st, 2020. To celebrate the launch the whole J.J. Corry team will host a virtual tasting at 5pm GMT on May 1st across the J.J. Corry social media channels. The Hanson is named after J.J. Corry’s son in law who was a revenue man in the early 1900’s known locally as “The Gauger Hanson”.

“As curators of casks, we are building a library of Irish Whiskey flavours with which to create unique blends. The Hanson perfectly reflects the matchmaking element encompassed in the art of Irish Whiskey Bonding and showcases the best of Ireland’s distilleries. It is a meticulous blend of Irish Grain Whiskey from different Irish distilleries. Four and ten years aged in ex-bourbon barrels, each cask was selected to build complexity upon those sweet fruit qualities of the grain whiskey. The four year old was matured on site in County Clare in juicy ex-bourbon casks we hand-picked ourselves in Louisville Kentucky. The Hanson is a classically bright, fruit-forward Irish Whiskey, which is mellowed with deep oak and rich toasted vanilla notes. The Hanson is perfect by itself or in a refreshing high-ball and the ideal whiskey for summer months.”

Louise McGuane devotes her time to selecting the best new make spirit and mature Irish Whiskey stocks to match with the casks she acquires from distilleries and wineries around the world for maturation. Irish Whiskey Bonding is the practice of sourcing whiskey from third party distilleries, maturing it onsite until it is ready and then finishing or blending to create a unique stand-alone Whiskey. Bonding was a once common way of producing whiskey in Ireland. The bonders were often publicans and grocers in local towns who made whiskey for their local clientele. The practice died out in the early 20th Century when the Irish Whiskey Industry collapsed. Instead of selling to Bonders, the few remaining distilleries in Ireland then chose to control their route to market and cut off supply to the Bonders.