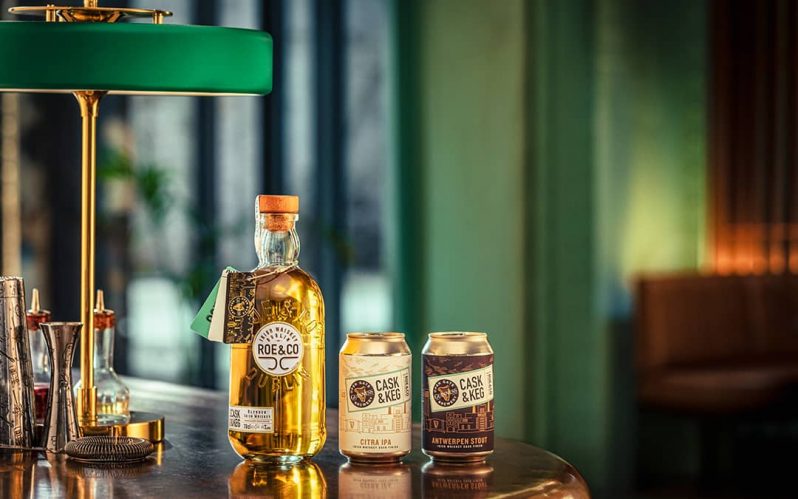 Roe & Co. Irish Whiskey has teamed up with Guinness Open Gate Brewery to release a new whiskey exclusively available at the distillery

Behind the doors of The Roe & Co Distillery, in the heart of Dublin’s whiskey district, something magical has been happening over the last several months. A marriage of sorts between Cask and Keg. Given this was once the Guinness Power Station, it was a matter of time before real-life neighbours Guinness Open Gate Brewery and Roe & Co Irish whiskey came together to create something truly special. This December, they’re ready to share their latest innovative releases with the island of Ireland.

Partnering with the Guinness Open Gate Brewery – a true hub of innovation – Roe & Co aimed to showcase the best of the Dublin 8 neighbourhood by creating two unique expressions of whiskey and two experimental beers.

Testing and experimenting to see what would happen next in the world of flavour surrounding beer and whiskey, Roe & Co’s Master Blender, Caroline Martin, collaborated with the Head Brewer at Guinness Open Gate Brewery, Peter Simpson, to create something truly unique, based on the reaction between these products.

The process which took place, started with the two beers, which Caroline chose, Citra IPA and Antwerpen Stout, which were aged in Roe & Co Irish whiskey casks to create two unique and brilliant whiskey finished beers.

Roe & Co Cask & Keg, Distillery exclusive whiskeys can be bought individually at €85 or as a giftset retailing at €95 for one bottle of the chosen whiskeys and four beers (Two of each finish). Available from 16th December, purchased through www.shop.roeandcowhiskey.com

Roe & Co have adapted their ecommerce offering that will give whiskey lovers a range of exciting and uniquely tailored products and services online. We know people are looking for unique ways to entertain themselves at home, especially during the holiday season. Roe & Co will ensure that each person will be transported on a journey of taste and discovery through their exciting offerings and gifts online.

It’s never too late to start honing those cocktail making skills and Roe & Co has just the solution with gifts to suit all tastes this Christmas. From the whiskey lover to the bartender in the making, there’s something for everyone.

For the  budding bartender in your life, gift them to something a little different this year with the Roe & Co Ultimate Cocktail Set (€250), filled with everything one needs to make the most delicious festive beverages.

For those who like things a little straight up, Roe & Co’s Old-Fashioned Kit (€50) is just the solution with custom made Roe & Co glassware and barware to compliment any occasion at home across the holidays.

There’s always one loved one that’s so hard to buy for (or surprise!), but fret not, Roe & Co has you covered with their Roe & Co Barrel & Whiskey Kit (€240) made from handcrafted Hungarian Oak Takoji. Why not make it that extra bit personal by engraving their name or a special message on the barrel.

Roe & Co Distillery’s online shop is full to the barrel with luxury gifts to give to friends and family this Christmas. With a full and vast range of Irish Whiskey, Cocktail Kits, Glassware and Limited-Edition Sets, there’s something for everyone. The final day to order in time for Christmas is Thursday the 17th, so make sure you get your last-minute Christmas shopping done before then!

Get the facts. Be Drinkaware. Visit drinkaware.ie.