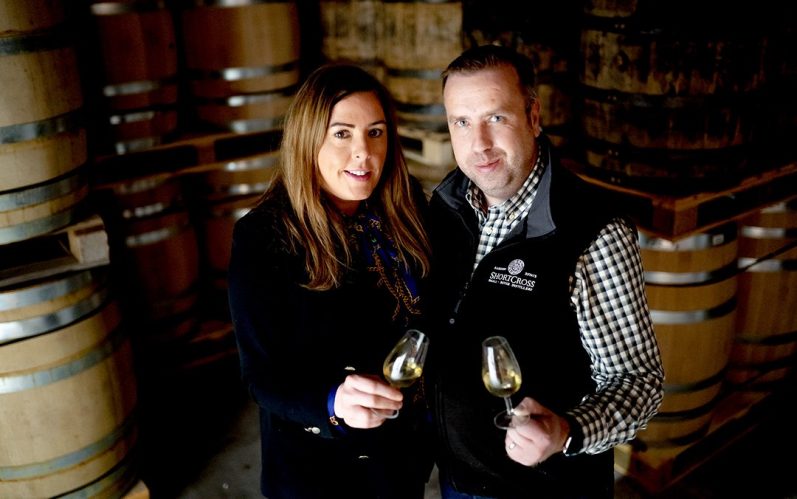 The following press release has been issued

Rademon Estate Distillery is proud to announce the inaugural release of Shortcross Irish Whiskey.  This unique release is the first Irish whiskey to be wholly distilled and released by a new Irish whiskey distillery in Northern Ireland since the 1920’s and the first whiskey to be released outside of the Old Bushmills Distillery since the closure of the Old Comber and Coleraine distilleries.

The whiskey was double distilled on Rademon Estate Distillery’s original 450L copper pot still which at the time was the smallest whiskey still in use on the island of Ireland.

The whiskey has been matured in a unique cask combination that uses neither traditional bourbon nor sherry casks.  In an industry first, the inaugural batch of Shortcross Irish Whiskey is matured fully in Grand Cru Classe Bordeaux red wine casks before being finished in Chinquapin oak, the first time this unique cask combination has been used in Irish whiskey.  These casks have delivered less than 700 bottles for this inaugural release.

The whiskey has been fully matured for 5 Years and is the first of the new wave of releases from new Irish Whiskey distilleries to carry an age statement on whiskey that has been produced at the own distilleries.

“When laying down these casks of Irish whiskey we had a vision that we always wanted to create something unique for our first release.  In doing so we set ourselves a challenge of sourcing the right casks that would mature the newly created spirit to show case the unique flavours and aromas of the whiskey.”

“This has been the combination of over 10 years work to build a new distillery in Northern Ireland and in doing so created exceptional spirits.  As the first woman to found and operate a modern Whiskey distillery on the island of Ireland this release feels like a significant landmark for both Rademon and also the Irish Whiskey industry as a whole.”

Details of the bottling