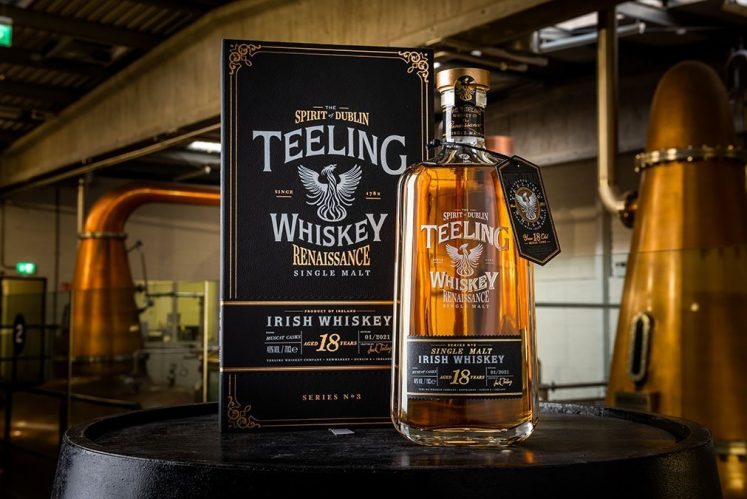 Teeling initially launched the Renaissance Single Malt Series in 2019 to celebrate the true global Renaissance of Teeling, Dublin and Irish whiskey as it continues to be the fastest-growing Premium Spirit in the world supported by the vibrancy from the many new entrants to the category.

The third bottling of The Renaissance Series consists of 18-Year-Old Single Malt that was aged initially in ex-Bourbon barrels before being finished in ex-Muscat wine casks, imparting distinct tropical fruit notes with fresh citrus and a touch of mint. As with releases the previous bottlings in the series, this is limited to just 9,000 bottles, bottled at 46% with no chill filtration.

“We are delighted to launch the third release of our very popular and award-winning Renaissance Series of aged Single Malts. These releases are a celebratory bottling series to mark the true Renaissance of Dublin as the epicentre for world-class city based whiskey distillation.”

The release is beautiful presented in a very unique tall decanter bottle and gift box. Retailing at a RRP of €140.00, the Renaissance 18-Year-Old Single Malt will be available in Ireland at the Teeling Whiskey Distillery in Dublin 8, The Celtic Whiskey Shop, James Fox’s, Irishmalts.com and premium independent Irish off licences as well as being rolled out to key International Markets such as the Belgium, UK, Holland, France, Denmark, Italy and select Asian markets.