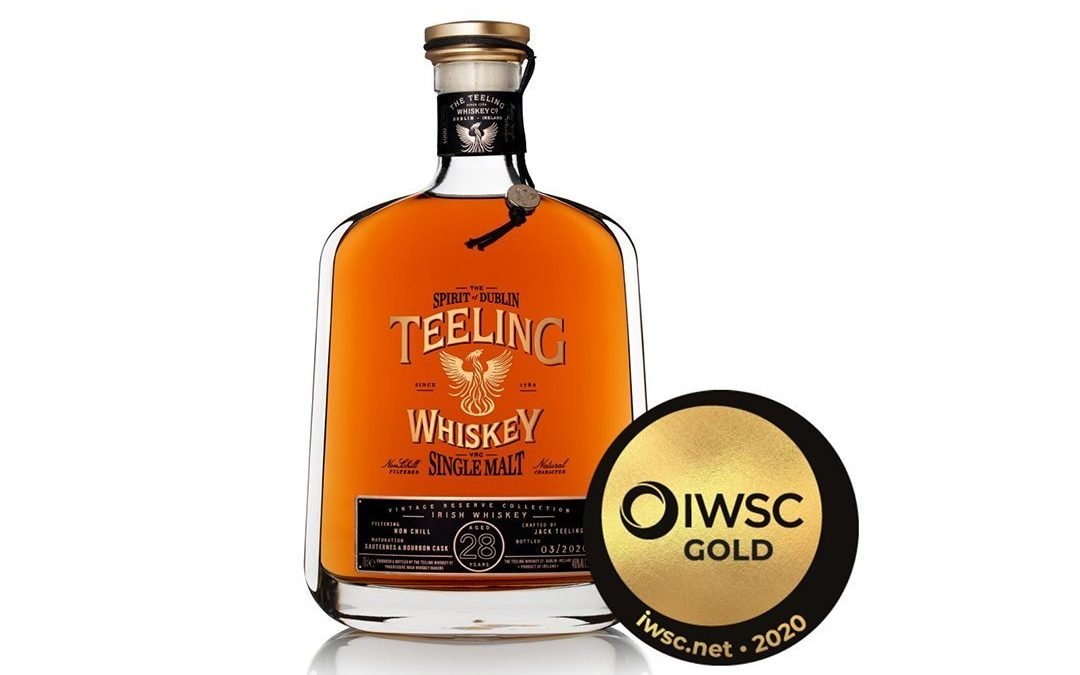 Teeling Whiskey is delighted to announce it has been honoured as the top rated Irish Whiskey for its 28-Year-Old Single Malt at the prestigious 2020 annual International Wine & Spirits Competition (IWSC), based in London and results announced on 7th August. Of all the International awards received, the International Wine & Spirit’s Competition (IWSC) is recognised as the world’s most prestigious. The competition is one of a kind as it conducts full ‘double’ blind tasting (glasses are pre-poured in a separate room) by panels selected from over 300 fully qualified industry judges followed by an extensive chemical analysis of the product.

At this year’s IWSC Teeling Whiskey received the highest rating of any Irish Whiskey with an overall score of 96 out of 100 and subsequent gold medal for its 28-Year-Old Single Malt. This was closely followed by its Renaissance 18-Year-Old Single Malt with a score of 95 out of 100 as well as a further six silver medals and four bronze medals for its other Teeling Whiskey offerings.This latest batch of honours builds on the International reputation Teeling Whiskey has earned since its formation in 2012 and brings the total to nearly 300 International Awards for their Irish Whiskeys. These accolades include the prestige honour of the “World’s Best Single Malt” which they received at the World Whiskies Awards in 2019 and reaffirms its status as the premier Irish Single Malt whiskey producer.

“For every bottling of Teeling Whiskey we put in a lot time and effort to make sure each release is a true reflection of our aspiration to be one of the best Whiskey producers in the world. As such, to consistently be rated as the best Irish Whiskeys in the world, makes all our teams’ efforts worthwhile. Irish Single Malt is an underdeveloped category with bags of potential so we are delighted to be leading the way for this premium segment within the Irish Whiskey category.”

The Teeling 28-Year-Old Single Malt Irish Whiskey was first distilled in 1991 and matured in Bourbon casks then allowed marry in Sauternes wine casks producing a wholly unique taste experience. This small batch bottling is limited to just 4,000 70cl bottles which were hand bottled in unique decanter bottles and come with their own certificate of authenticity. Retailing for €500 per 70cl bottle this is available in the Teeling Distillery in Newmarket, Dublin 8 as well as good independent off-licenses in Ireland and in a number of European and Asian export market.