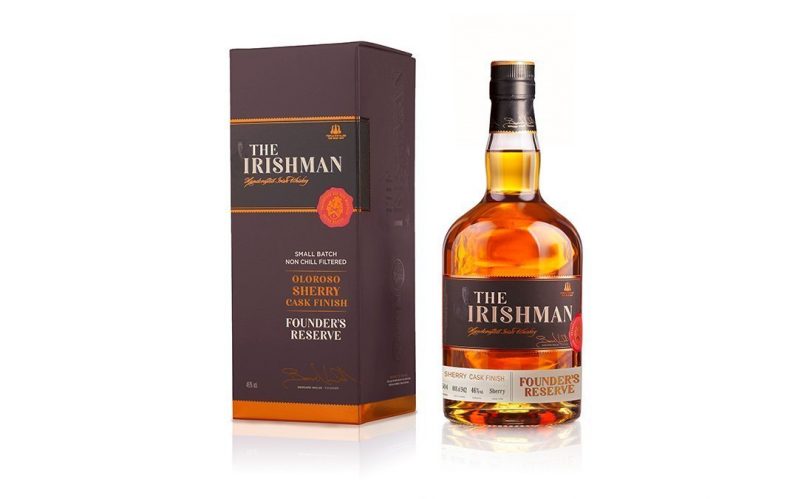 The Irishman Founder’s Reserve Gets Sherry for Merry Christmas

9 Casks to be shared worldwide across select markets, including USA, Canada, Russia and Ireland

As noses begin to tingle with the smell of dried fruit, cinnamon and spices in markets and kitchens, Walsh Whiskey announce the timely release of an exclusive, limited-edition release of The Irishman Founder’s Reserve – Oloroso Sherry Cask Finish to ease you through the festive season. It is the first time The Irishman Founder’s Reserve, a rare blend of Single Malt & Single Pot Still premium whiskeys, has been finished in Oloroso sherry casks. Previous limited-edition finishes have seen Florio Marsala and Chairman’s Reserve Rum cask finishes.

The Irishman Founder’s Reserve – Oloroso Sherry Cask Finish is triple-distilled entirely in copper pots and aged in American Oak Bourbon Barrels before being finished in Oloroso casks for an additional 12 months and bottled at 46% ABV. The release is limited to just 9 sherry butts, which will yield just over 8,000 bottles. The casks are being distributed to a limited number of markets including the USA, Canada, Russia, Ireland, and a select number of other key regions. The recommended retail price is $99.99 / €75.

Announcing the limited-edition release, Bernard Walsh, creator of The Irishman range of whiskeys and Managing Director of Walsh Whiskey, said:

“This decadent Oloroso sherry finish to Founder’s Reserve, which is our original whiskey, combines to deliver Christmas in a bottle. It is meant to be a treat to accompany the rich baking and cooking of the festive season, and of course to either reflect on the day or to share with your nearest and dearest. I hope you will join me in savouring a tasocan (‘tash-cawn’/ dram) of this limited edition over the Winter months.”