Leading Irish visual artist, Leah Hewson, has released her latest work, but you won’t find it in a gallery or exhibition.

Partnering with Waterford Distillery, Hewson has created Binary Assimilation – an original artwork for the bottle label of the distillery’s flagship single malt whisky coming this September: The Cuvéee.

Hewson’s aim was to celebrate the ‘many layers and complexities within Waterford’s distillation process and the immense sensory experience of consumption’.

Waterford’s unique methodology is terroir-driven. The concept, which is commonly practised by the world’s greatest winemakers, is based on the principle that factors such as weather, soil, and microclimate influence the flavours found in barley and the whisky made from it.

To make its multiple award-winning Single Farm Origin whiskies, Waterford Distillery maintains the integrity of each crop of barley by harvesting, storing, malting and distilling it separately. Each Single Farm Origin has been produced separately using barley grown only on individual terroirs throughout the South of Ireland.

This individuality can be celebrated in its own right, but the ultimate aim is to layer these component spirits together – in precisely the same manner as a Grand Vin in Burgundy, or Grand Cuvée in Champagne – for ultimate complexity. The whole, greater than simply the sum of its parts.

This means – for the first time in whisky production anywhere – Waterford Distillery is assembling 23 different Single Farm Origin component single malts to create the definitive Waterford Whisky: The Cuvéee. It is a lodestar for the brand and a milestone bottling.

Leah Hewson’s original artwork reflects the intricate nature of such a milestone product. Two computer-generated images that are depicted in paint have been divided into strips and overlaid with opaque and transparent red and green stripes, and a neon squiggle in to create ’ambiguity and illusion’. 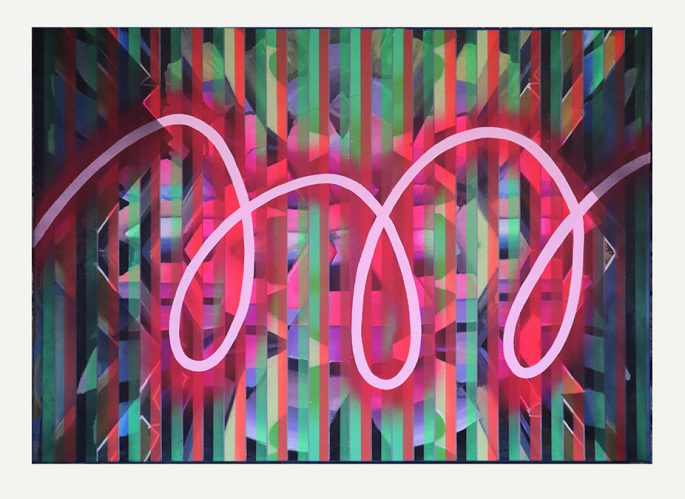 Binary Assimilation celebrates the many layers and complexities of Waterford’s approach to whisky production. The brand’s scientific and methodical approach reflects my own and this provided an inspiration to sync art, flavour and character into something visually striking. By building the piece in layers through colour, I was able to create new dimensional effects to match the concept of The Cuvéee.”

“This is no ordinary whisky – it’s our lodestar, a key milestone on our terroir-driven journey – our raison d’etre. Its vision, evolution derived from unprecedented logistics, merits an equally outstanding label. We commissioned one of Ireland’s leading artists, Leah Hewson, to create a contemporary image that was unlike another whisky label. One that shared the elemental construct, evoking vibrancy, a bold statement and a multi-layered feel. A label unlike any other, for a whisky unlike any other.”