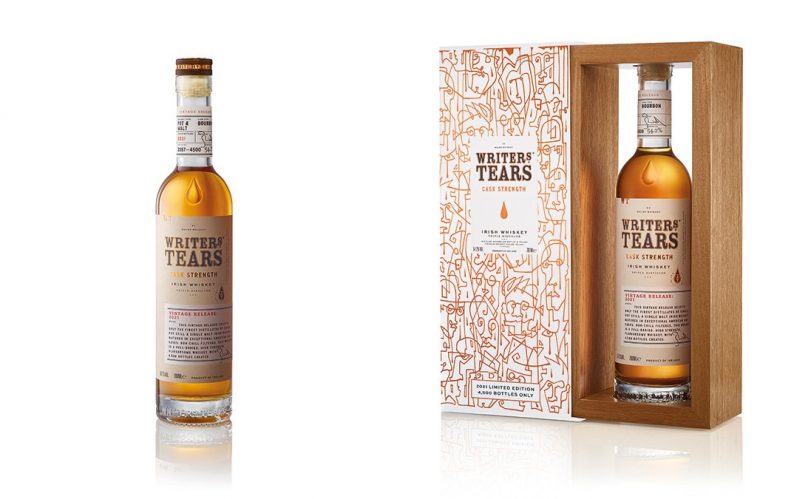 The 2021 vintage of Writers’ Tears Cask Strength whiskey, the 11th edition of the super-premium expression from Walsh Whiskey, has been released. It is a unique cask strength whiskey crafted through a rare vatting of aged Single Pot Still and Single Malt Whiskey. Both whiskeys are triple distilled, natural non-chill filtered and aged in Bourbon barrels. This year’s vintage is bottled at 54.2% ABV. Each label carries the signature of Writers’ Tears creator and Walsh Whiskey Co-founder – Bernard Walsh.

The 2021 release is limited to 6,000 individually numbered bottles. The super-premium whiskey is for sale across selected markets worldwide, with 1,500 bottles destined for the USA and 4,500 distributed across the rest of the world including key markets; Ireland, Canada, Austria, France, Germany, Holland, Russia (Alberta & British Columbia), the UK and Travel Retail. Stockists and distributors of Writers’ Tears internationally can be identified through the search function on the Walsh Whiskey web-site – Buy | Writers’ Tears | The Irishman Premium Irish Whiskeys (walshwhiskey.com) . The RRP is USD$150/ €140.

“Cask strength Irish whiskey is still quite rare, but our vatting combining both Pot Still and Single Malt is truly unique. While still a very limited number, we are pleased to be able to offer some 6,000 bottles this year to our growing worldwide community.”

Left Bank is currently being produced in Dublin, Paris and New York, where the project originated. It will be a hybrid feature documentary – using scripted scenes, animation and graphics, interviews with expert and archival footage/photos. The film will evoke the time, place and mood of effervescent 1920s Paris as women fought to fulfil their creative and intellectual potential.

Writers’ Tears Irish whiskey, is providing funding, promotional and liquid support to the project team. The producers are in the process of arranging the financing of the innovative film which has a budget of [approximately €1.3 million/ USD$1.6 million]. The first phase of development funding, being raised on Kickstarter.com, closes soon on the 9th June, 2021.

Announcing the partnership, Bernard Walsh, the creator and owner of Writers’ Tears whiskey along with his wife Rosemary, said:

“We are delighted to further our association with the arts, and in particular the works of James Joyce, through this great partnership with the team producing Left Bank – The Film. We already support Sweny’s Pharmacy of Lincoln Place, which the author himself visited in 1904 and which featured in Ulysses as part of Leopold Bloom’s legendary walk through Dublin on 16th June of the same year, when the entire novel is set. We have exciting plans to bring our celebration of Joyce’s creative genius to new levels next year, the centenary of the publication of Ulysses and Bloomsday itself.”

“We are thrilled to be working with Bernard and Rosemary Walsh to produce this film which reframes history, telling the story of these remarkable feminists who were the cornerstones of Joyce’s literary success.”

“Our team of award-winning female filmmakers is based in Ireland, France, Finland and America,” Applegate said. “We start shooting in Dublin on Bloomsday (16th June) and will be back to shoot the narrative scenes between Nora and James in the Fall.”

The narrative scenes will be shot at a studio in France and co-produced by Margaux Dupont’s VLAM Productions.

“I’ve been researching this untold story for more than 10 years. We are so happy to be sharing it with Joyceans and others who love books and literature.”