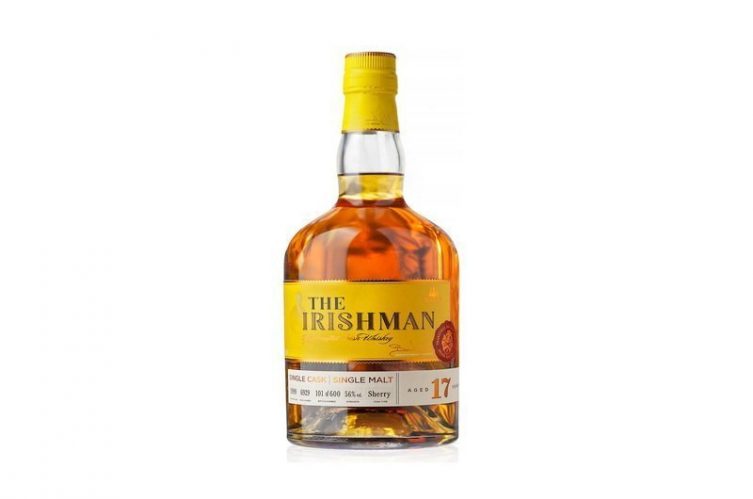 Crowned overall Irish Whiskey of the Year at the annual event, the accolade tops off what has been a fantastic year for The Irishman 17-Year-Old Single Malt. It was also named Best Irish Single Cask Whiskey at the Irish Whiskey Awards on top of taking home a Masters medal at the Irish Whiskey Masters earlier this year and being crowned Irish Single Cask of the Year by Jim Murray’s Whisky Bible 2019. The Irishman 17-Year-Old Single Malt is an extremely limited release, with just three casks of 600 bottles per cask produced each year. Originally released in 2016 to mark Walsh Whiskey’s 17th year in business, the expression has become a must-have in any whiskey enthusiast’s collection.

The Irishman 17-Year-Old Single Malt is a superlative Single Malt resulting from 17 years maturation in a first-fill Sherry Butt. The signet of this exceptional 17-Year-Old is its rich deep flavour and great warmth. This super-premium, triple distilled Irish whiskey is bottled at 56% ABV and non-chill filtered. Other expressions from the Walsh Whiskey portfolio that received Irish Whiskey Awards for 2019 were the newly released Writers’ Tears Copper Pot Japanese Mizunara Oak Finish and Writers’ Tears Cask Strength 2019 Release, both of which received Gold Medals.

“The quality of competition across all categories is a testament to the fantastic industry we have here in Ireland. The Irish Whiskey Awards are the equivalent of the Oscars for the industry and we are honoured to hold the title of Best Irish Whiskey 2019”.

The Irishman is currently enjoying sharing the spotlight with Martin Scorsese’s latest release of the same name. Premiered at New York Film Festival in September and coming to Netflix at the end of November, The Irishman Movie is no doubt hoping to emulate The Irishman whiskeys success across the boards. Emerging and established Irish whiskey distillers and producers were celebrated last night (Thursday 17th October) at the 2019 Irish Whiskey Awards which took place on the grounds of Dingle Distillery, Dingle, Co. Kerry.

Now in its seventh year, the Irish Whiskey Awards, founded by The Celtic Whiskey Shop, has become an important date in the Irish events calendar and raises much-needed funds for the very deserving charity Mary’s Meals.